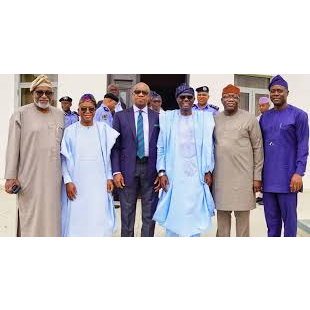 Governors in the South-West have agreed to jointly close all the borders in the region as part of measures to prevent the spread of the deadly coronavirus disease.

The decision was made at the virtual meeting held by the governors of the region – namely, Lagos, Ogun, Oyo, Osun, Ondo and Ekiti states – under the auspices of the South-West Governors’ Forum on Thursday.

In a statement personally issued by the Chairman of the forum and Governor of Ondo State, Mr Rotimi Akeredolu, on Friday, the governors also resolved that using of face masks was now compulsory for all the residents of the region.

The statement read, “The entry points of our six states be closed forthwith to contain the spread of COVID-19 pandemic.

“The state governors agreed that people involved in essential services or dealing in medicine, water and consumable items in particular traders and market men/women should endeavour to wear face masks while outside plying their trade, to minimise the spread of the deadly virus.

“The governors further agreed that wearing of face masks would be made compulsory for everybody coming out of their homes effective from Friday, April 24, 2020 in their respective states.”

The South-West governors’ decision came just as the Nigeria Centre for Disease Control on Friday announced fresh 51 cases of the COVID-19 in the Federal Capital Territory and seven other states.

Lagos recorded the highest number of new cases at 32. Six new cases were recorded in Kano; Kwara, 5. The FCT, Oyo and Katsina recorded two new cases each, while Ogun and Ekiti states recorded one new case each.

The fresh cases brought to 493 the number of COVID-19 cases in the country. While 159 patients had been discharged, 17 patients had died.

Speaking on the joint border closures, the Ogun State Governor, Dapo Abiodun, tweeted via his verified Twitter handle @dabiodunMFR on Friday, saying, “My counterparts and I in the South-West have unanimously taken the decision to close the borders of all the six states within the region, as part of joint efforts to combat the importation of coronavirus.”

My counterparts and I in the southwest have unanimously taken the decision to close the borders of all six states within the region, as part of joint efforts to combat the importation of the Coronavirus. pic.twitter.com/pVcvQaKM6i

Also, the Oyo State Governor Seyi Makinde, who spoke through his media aide, Moses Alao, said the border closures agreement by the governors of the South-West might affect states that shared borders with any of the six states in the zone.

“I think that going by the decision at the virtual meeting, states in the South-West sharing borders with other states outside the zone would close their borders so that there would not be an entry into the zone,” he said.

Meanwhile, the South-West Governors’ Forum has also dissolved the Board of Directors of Odu’a Investment Limited.

The forum mandated the Group Managing Director of the company to be in charge of the region’s business venture.

“As the owner state governors, we dissolve the Board of Directors of Odu’a Investment Limited with immediate effect. The Group Managing Director should take charge of the conglomerate affairs pending the constitution of a new board,” Akeredolu said.