Politics Comments Off on Oyegun: GEJ not maintaining dignity after leaving office 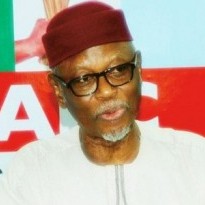 For boasting that his legacies still remained unparalleled after exiting office two years ago, former President Goodluck Jonathan has come under attack of the national chairman of ruling All Progressives Congress, APC, Chief John Oyegun. Oyegun said Jonathan had thrown dignity and decorum to the winds and took to infantility, factors which in his estimation, gave low reckoning to his status as a former President and the office he occupied.

He also took a swipe at former Vice President, Atiku Abubakar, who recently resigned his membership of APC, saying his presidential ambition in 2019 would fail.

Oyegun spoke in an exclusive interview with Vanguard on contemporary national issues in Abuja yesterday.

Jonathan had, while reacting to Governor Kassim Shettima’s remarks at a book launch last week in Abuja that his (Jonathan) regime wasted the goodwill of the people, reeled out his achievements in office, boasting that the current government in all its  critiques against him was yet to match them.

But reacting to the statement, Oyegun chided the former President for not maintaining dignity in retirement, saying he might end up losing what was left of his reputation should he continue responding to trivial issues.

He said that the sorry state of East-West road, the dilapidation of Port Harcourt airport and the menace of Boko Haram which he couldn’t tackle, were some evident postures that Jonathan’s administration failed woefully.

Submitting that Jonathan attained the highest political position in the land with less personal effort of his, Oyegun said he blew the opportunity of the south-south geopolitical zone in the presidential zonal arithmetics, stressing that the former President who hailed from the zone did not make the people of the area proud in any way.

While arguing that Jonathan’s only passmark at the moment was conceding to electoral defeat in the 2015 presidential battle with President Muhammadu Buhari, the APC chairman, however, said that new intelligence had emerged that the former President tried to reverse himself afterward.

Oyegun said:  ‘’I think former President Goodluck Jonathan is not being well advised.  The first thing for a man whom God has elevated with little effort to the position he attained is to maintain some dignity and decorum after office. That he is not doing.

“He was God’s gift to the south-south. There was a massive movement in the south-south to have one of our sons as President. On a platter of gold, God gave him to us. Did he make us proud? The answer is no. That’s one lost opportunity.

‘’We don’t know when that opportunity will come again for the south-south to produce a Nigerian president and the south-south has been significant throughout our history in maintaining coherence of this nation through all its difficulties.

‘’Finally, we had that golden opportunity and we blew it. He is honored and respected today because of his singular act of conceding the defeat, even though we now know that he tried to reverse himself.

‘’So, my advice to him is, let time heal wounds. Don’t answer every little query and question about your Presidency because the facts are all there, very glaring.

“But because of that singular act to save the nation, saved a lot of lives because the country was so charged at that time. So, accept that respect that the nation and the world give you. He is young relatively.  Tomorrow, he will get over this.

‘’But if he starts doing what he is doing now, then I am really sorry he may just end up losing everything.”

Oyegun also rebuffed pressure to give more details on the revelation that Jonathan tried to reverse himself.

“Oh, that’s part of our history now but let’s leave it and hope he takes good advice,” he said tacitly.

Speaking on the departure of former Vice President, Abubakar Atiku, from the ruling party, Oyegun said the development was no surprise to them.

According to him, signs that Atiku will leave the party became glaring almost 18 months ago.

The national chairman also refused to accept that the former vice president’s exit was boiling up the party.

He said: “Did you say boiling up? All I can say is that I am totally amazed at the song and dance that the press is making of the departure of the former vice president, Atiku.  We are not happy losing anybody, certainly not anybody of his status.

‘’But why are people surprised that he left? I can’t understand it. More than 12, 18 months ago, it was clear that he would leave. The only doubt was when and how?

“For Vice President Atiku, at his age, it is either now or never because if President Buhari serves another, that will be eight years. Convention will have it that the Presidency may go south.

‘’That’s another eight  years. So, game over for Vice President Atiku. It is either now he make this last throw of the dice or he will permanently forget the Presidency. So, it is something we knew has been coming. The Bennis say a pebble you see coming towards you shouldn’t blind you. So, why are we surprised?”

Reminded that Atiku has also vowed to beat the President in the 2019 contest, Oyegun said  it was not possible.

In his personal opinion, the chairman prayed that President Buhari would run for a second term in office.

“What else do you expect him to say? Atiku will say that but there is no chance of that happening anyway.

BUHARI VS ATIKU: THE 2019 GAME PLAN. By 'Èrùòbodò' Lánre Oyènúgà Fayose to APC: You’ve more years to stay in trenches