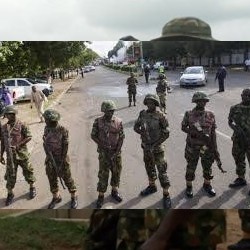 One person was killed Thursday in Warri, Delta State, South-South Nigeria, during a clash between angry youth and soldiers enforcing the stay-at-home order in the state because of the coronavirus.

The Delta State government has identified the slain youth as Joseph Pessu, said to be 28 years old.

Information surrounding the clash is still hazy but two persons who spoke with PREMIUM TIMES attributed it to the highhandedness of the officials of the Nigerian Army who are patrolling the city.

In one of the video clips of the incident, some youth are seen running around, while thick black smoke could be seen billowing out of the area and the sound from gunshots heard from a distance.

“I don’t even understand what is wrong with these people,” a voice, apparently from people who did the recording, could be heard from the background. “It’s so crazy, they are fighting with them.”

Another clip of the incident showed some youth brutally assaulting a soldier.

The Commissioner for Information in Delta State, Charles Aniagwu, said the state government was worried about the killing and has requested the military authorities to investigate it.