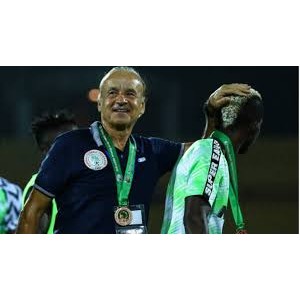 The Nigeria Football Federation president, Amaju Pinnick, has insisted it will no longer be business as usual if the Super Eagles coach Gernot Rohr will be given a contract extension with the country’s national men’s football team.

Speaking on Arise TV on Monday, the NFF boss outlined three major conditions the German tactician will be required to accept and meet if he is to continue as the Super Eagles technical adviser.

Pinnick who also suggested that the onus is on Rohr to accept or decline the new deal he is to be offered, added that the NFF has several options of those genuinely interested in coaching the Super Eagles.

“We have told him. He must live in Nigeria. His salary will be in Naira. He must go around the leagues and see how he can nurture the players.

“If he is able to accept it, we have a deal. There are a lot of coaches that want to coach Nigeria,” Pinnick added.

Rohr, 66, is yet to win a silverware for Nigeria though he helped the three-time African champions qualify for the 2018 World Cup in Russia and also led them to a third-place finish at the 2019 Africa Cup of Nations in Egypt.

Rohr, whose current contract runs out in July, has been praised for moulding out a Super Eagles team that has a mixture of youth and experience.

The Super Eagles were scheduled to play Sierra Leone in Delta State capital on March 27 while the reverse fixture was expected to be held in Freetown four days later before the game was suspended due to coronavirus fears.

Nothing is going to happen to you, By Femi Aribisala Nyesom Wike asks Federal Govt, 'Why give Lagos N10 billion for COVID-19, and nothing to Rivers?'