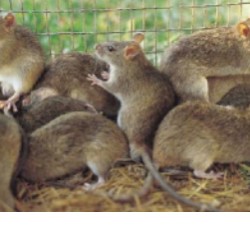 The death toll from the ongoing Lassa fever outbreak in Nigeria has risen to 185, the Nigeria Centre for Disease Control (NCDC) said on Thursday.

Amidst the global coronavirus outbreak, Nigeria has also been battling a Lassa fever outbreak since the beginning of the year with 951 confirmed cases of coronavirus infection.

As of last week, the number of deaths from the fever was 176, meaning nine people died from it within the week.

NCDC said there was a decline in the number of cases reported for the reporting week 13 as to the four consecutive weeks.

The decline in new cases might be explained by the beginning of rainfall in some parts of the country.

Lassa Fever has become an endemic disease in Nigeria and is now being diagnosed all year round. The outbreak peaks in the dry season from November to May.

According to the NCDC weekly report, three states, Edo, Ondo and Ebonyi, still have the highest number of cases from the outbreak.

Of the confirmed cases, 72 per cent are from the three states: Edo, 32 per cent; Ondo 32, per cent, and Ebonyi eight per cent.

For the reporting week, there was a decline in the number of new confirmed cases as it decreased from 28 cases in week 12 to 19 cases.

In total for 2020, 27 states have recorded at least one confirmed case across 126 local government areas

Also, there has been a significant increase in the figures when compared to the same period in 2019.

The number of suspected cases has significantly increased compared to that reported for the same period in 2019.

Also, the predominant age-group affected is 21-30 years and the male to female ratio for confirmed cases is 1:1.2.

However, the was good news for health professionals as no healthcare worker was affected this week.

Every year, health workers are also affected by the disease, sometimes leading to fatalities. So far, a total of 34 health workers have been infected with the virus.

Health workers are often in the first line of call in the treatment of Lassa fever patients, which makes them susceptible to contracting the disease.

In response to the outbreak, NCDC has been coordinating a National Emergency Operations Centre (EOC).

The agency said it has been working to support every state in Nigeria to identify one treatment centre while supporting existing ones with care, treatment and IPC commodities

Lassa Fever is a hemorrhagic disease transmitted by a vector called the multimammate rat. The virus is transmitted from the excreta or urine of the vector to humans, and from humans to humans.

Anyone suspected of being in contact with a Lassa patient needs to be presented to the health facilities within 21 days.

Symptoms of the disease at early stages are similar to febrile illness such as malaria.

Early diagnosis and treatment increase a patient’s chances of survival.