‘I want the boys at the top’ – Joshua eyes up Fury, Whyte & Usyk 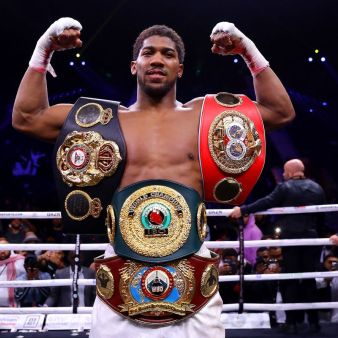 The country might be on lockdown but there is still plenty to talk about in the world of boxing.

One man who has been quite vocal during this downtime is unified heavyweight champion Joshua. He has welcomed a fight with, well, pretty much all the big boys of the division.

The Briton is scheduled to fight Kubrat Pulev, who is mandatory for the IBF belt, but the original June date has been postponed because of the coronavirus pandemic.

“Pulev isn’t on my level – I’m walking through him. I want the boys at the top. I’m looking at Fury like I’m going to walk through him as well,” Joshua said.

Later in the week, Joshua turned his attention to former foe and compatriot Dillian Whyte, telling Sky Sports Boxing: “Once I’ve beaten Fury, Whyte can come and get this work as well.”

The bitter rivals fought in 2015, when Joshua won by seventh-round stoppage.

Whyte has since gone on to beat some top-level contenders in the division to become the number one challenger for Fury’s WBC belt, and is deserving of a crack at a world title.

But what if the fights with Fury and Whyte don’t come to fruition? Well, Joshua said he would happily take on Ukraine’s former cruiserweight king and WBO mandatory challenger Oleksandr Usyk.

You’d fully expect the heavyweight champion of the world to call out the best, right? But even though some fans like Joshua’s confidence, others don’t…

Coronavirus pandemic: Chrisland schools, parents disagree over resumption of learning, examination during lockdown Trump to temporarily suspend immigration into US due to coronavirus fears