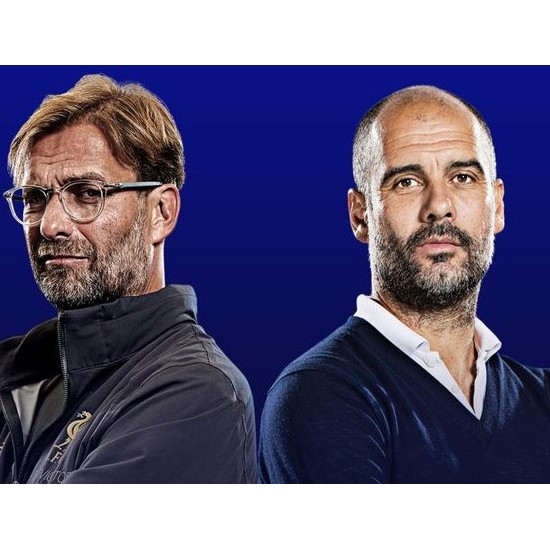 Rivals in the Bundesliga and now the Premier League, Pep Guardiola and Jurgen Klopp have driven each other on to new levels of excellence.

Liverpool were set to emerge at the Etihad Stadium this weekend, either with the scent of triumph in their nostrils or the delicious addition of a guard of honour from Manchester City.

The coronavirus pandemic has placed elite sport across the globe on hold, meaning the latest episode of Pep Guardiola and Jurgen Klopp’s captivating rivalry must wait.

Nevertheless, given their former employers Bayern Munich and Borussia Dortmund were also due to meet in Der Klassiker, it feels like a good time to run the rule over two men whose tactical approaches and high levels of achievement have – and it does not feel too grandiose to suggest this – changed football in the 21st century, as well as one another.

Guardiola’s arrival to take the reins of a treble-winning Bayern for 2013-14 came shortly after their rivalry with Klopp’s Dortmund reached its peak.

Arjen Robben’s 89th-minute winner saw Bayern down BVB 2-1 in the 2013 Champions League final at Wembley – a game played out against a backdrop of Dortmund’s star playmaker Mario Gotze agreeing terms to move to Bavaria.

In hindsight, Klopp’s gegenpressing machine – winners of back-to-back Bundesliga crowns in 2010-11 and 2011-12 – were coming off the top of their curve, having finished 25 points behind a relentless Bayern domestically that season.

The decline continued over the next two seasons. Dortmund were remarkably in relegation trouble halfway through 2014-15, before a post-Christmas recovery preceded Klopp’s emotional farewell.

Nevertheless, there was still time for telling blows to be landed. Guardiola’s first competitive game in charge saw Bayern beaten 4-2 in the 2013 DFL-Supercup at a delirious Signal Iduna Park.

Stung by that loss, Guardiola sprung a notable surprise in the first league encounter between the sides that November, where he broke Dortmund’s rabid press by playing Javi Martinez as an attacking midfielder and repeatedly targeting the rangy Spain international with long balls.

The high priest of tiki-taka (a label Guardiola famously loathes) had presided over “more long balls than in the last three years combined” from a Bayern team, according to Klopp, who bristled after Arjen Robben and Thomas Muller added to Gotze’s inevitable second-half opener in a 3-0 win.

A depleted Munich were similarly reactive when they won the DFB-Pokal final 2-0 in extra-time, even if flooding midfield numbers was a more recognisably Guardiola tactic.

Diverting from his dizzying 4-3-3 of swirling triangles has remained something the Catalan tactician has frequently done across his meetings with Klopp, and not always with the success he enjoyed in Germany.

HOLLOW VICTORIES AND THE PHONEY WAR

Klopp ended his homeland head-to-head against Guardiola with three victories, making it back-to-back Supercup triumphs in 2014, having claimed a 3-0 Bundesliga result at Allianz Arena earlier that year – the authority of which was dimmed by the fact Bayern had already cantered to the title.

Guardiola had four victories to his name, with one draw ultimately falling in Dortmund’s favour as Bayern failed with all four of their penalty attempts in a 2015 DFB-Pokal semi-final shoot-out.

However, Klopp was denied a glorious farewell as his team lost in the final to Wolfsburg and the fact Robert Lewandowski had followed Gotze to Munich by this point underlined a deck stacked against him. Liverpool came calling for Klopp in October 2015 and he helmed helter-skelter runs to the EFL Cup and Europa League finals. Manchester City and Sevilla prevailed respectively.

That was Manuel Pellegrini’s final honour as City boss as he made way for Guardiola, who collected a third successive Bundesliga title in 2015-16. Thomas Tuchel’s Dortmund finished closer in terms of position and points (second, 10 behind) than Klopp’s version had managed when in direct competition.

With the stage presumably set for renewed hostilities between Guardiola and incoming Manchester United boss Jose Mourinho, the similarly newly installed Antonio Conte did not read the script as Chelsea romped to 2016-17 Premier League glory. Klopp got the better of his head-to-heads with City as a Georginio Wijnaldum goal sealed a 1-0 New Year’s Eve win at Anfield before Sergio Aguero rescued a point for the hosts in the return game.

Guardiola laid it on thick after that 1-1 draw, declaring it to be “one of the most special days of my life”.

“He is Spanish. They are a little bit more emotional than the Germans,” Klopp chuckled in response.

TON-UP BUT NOT INVINCIBLE AND THE ROAD TO KIEV

Liverpool beat City three times in 2017-18 when most other teams could barely lay a glove on Guardiola’s record-breaking side. But the game where City prevailed, an unusual 5-0 thrashing at the Etihad Stadium where Liverpool subsided meekly after Sadio Mane’s red card for clattering Ederson with a high boot, arguably had the biggest influence on the campaign. When that game was 11 v 11, Guardiola’s back three was horribly exposed.

Aguero’s opener arrived against the run of play, with an unusually wasteful Mohamed Salah having tormented Nicolas Otamendi.

City never used 3-5-2 in the league again that season, reverting to a swashbuckling 4-3-3 that churned out 19 consecutive wins and made the second half of the schedule a virtual procession.

Liverpool halted their designs on invincibility, however, claiming a raucous 4-3 Anfield win in January. Klopp hailed “pressing from another planet” by his front three as Roberto Firmino, Mane and Salah were all on target in a euphoric nine-minute spell after half-time.

Guardiola had again seen a swift avalanche of goals bring the roof in during a big match and his tweak to a 4-4-2 diamond, eyeing avenues around those Liverpool pressing lanes, backfired in that season’s Champions League quarter-final. A 3-0 first-leg loss at Anfield, with all the goals arriving during the first half, left City with a mountain to climb and a death-or-glory approach in the return fixture – deploying a formation probably best described as 3-CHARGE!!! – eventually ran out of steam in a 2-1 loss. But it was Liverpool who came up short in the Kiev final on Loris Karius’ nightmare outing against Real Madrid, while City sauntered to a 100-point haul as dominant Premier League champions. Sitting 25 points back in fourth, the Reds had a considerable gap to bridge.

Despite that deficit, their efforts in going blow-for-blow with City over 90-minute periods left the impression Liverpool were the best placed of the pretenders to overthrow the champions.

Both teams reconvened on Merseyside undefeated in October 2018 and remained that way as the free-flowing nature of recent meetings gave way to a cagey 0-0 draw. Reprising the theme of those early Klassiker meetings, Guardiola took his foot off the throttle as City played at a controlled tempo – an approach that would have ended the club’s Anfield hoodoo but for Riyad Mahrez’s ballooned late penalty. Fire and brimstone returned the following January, though, with a wobbling City recovering their poise and avoiding a 10-point deficit at the top. Aguero and Leroy Sane were on target either side of Firmino in a bravura display, where Aymeric Laporte took on the unfamiliar role of left-back to stifle Salah.

That was Liverpool’s only loss of the season as they finished on 97 points, agonisingly one shy of City. However, their subsequent Champions League final win over Tottenham improbably propelled them further along.

Just as Guardiola has tempered some of his more cavalier tendencies when faced with Klopp, the challenge of an unrelenting City also forced the Liverpool boss into subtle and decisive tweaks.

In bringing in Alisson and Virgil van Dijk, he spent big for what many see as the finest goalkeeper and centre-back on the planet. Their very presence means risk can be reduced.

Heavy metal football has given way to a steady pulsing beat that never wavers. In the city of Merseybeat, Klopp has gone electro.

Amid their steamrollering of the opposition this season, Liverpool have 19 wins by a solitary goal in all competitions.

They are frighteningly and ruthlessly clinical.

A profligate City trail in their wake, although Guardiola has used this relative freedom from pressure to thumb intriguingly through his tactical playbook in 2020.

Both men have inspired the other to reach beyond their comfort zones and the result is the two best teams in world football. With Klopp contracted to Liverpool until 2024 and Guardiola talking up an extended stay, the thought occurs that they are each other’s motivation for sticking around.

There is nowhere better to measure their greatness than against one another.