Across Nigeria Comments Off on Group hails army commander, Adeniyi, for bravery, patriotism in Boko Haram fight after removal by Army Chief 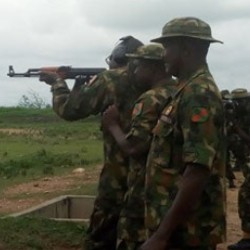 SaharaReporters had earlier reported that Adeniyi was removed as commander of Operation LAFIYA DOLE for revealing in a viral video that troops fighting Boko Haram terrorists lacked weapons and credible intelligence to execute their mission.

The rights group in a statement by Convener, Deji Adeyanju, on Tuesday, said it was obvious Adeniyi was vilified for saying the truth and looking out for the safety of his men on the battlefield.

The statement reads, “We are greatly impressed with Major-General Adeniyi and his men for their unwavering patriotism, steadfastness and gallantry in fighting against these enemies of humanity.
“We want to assure Major-General Adeniyi that Nigerian people look up to him and the boys, their devotion to duty, integrity and sense of honour and commitment to each other in the fight against Boko Haram is well appreciated and noted.”

Adeyanju called on the Nigerian Government to launch a thorough investigation into the welfare of troops fighting Boko Haram terrorists as well as investing in tools for efficient intelligence gathering.