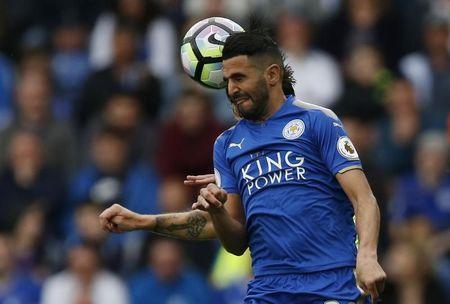 Leicester City have yet to receive any bids for winger Riyad Mahrez, manager Craig Shakespeare said on Tuesday, despite the Algerian announcing his intention to leave the Premier League club at the end of last season.

Mahrez has been linked with a move to AS Roma but the 2015/16 Premier League champions had not been contacted by the Italian side about a transfer for the 26-year-old, he said.

Shakespeare added that central defender Robert Huth had been ruled out for up to two months after undergoing ankle surgery.

“Mine is really simple: while he is here and while we have had no bids – and we haven’t had any bids, it’s all been speculation – he has to be committed to the football club.

“And I have to say, in the two weeks he’s been back he’s been totally committed and really trained well.

“Outgoings are inevitable at any football club but until there’s a bid for your player there’s no decision to be made.”

Leicester are one of four English top flight teams in Hong Kong this week to play in the Premier League Asia Trophy. They are due to take on West Bromwich Albion on Wednesday while Crystal Palace face Liverpool in the other game at Hong Kong Stadium.

Shakespeare will be able to give new signings Harry Maguire and Vicente Iborra a run out against Tony Pulis’ side and the Leicester manager believes he has strengthened his squad after a difficult campaign last year as defending champions.

“With Iborra his pedigree speaks for itself. He’s captained Seville, he’s won European trophies and he’s settled into the group and is a quality player and that says a lot.

“We will have targets (for the season), a lot of them will remain internal in terms of me and the players and coaching staff.

“We know the Premier League becomes harder each year, everyone invests heavily and we’re no different, but you have to be competitive.”

Shakespeare said Huth did not travel with the team to Hong Kong and is currently undergoing rehabilitation.

“Robert reported back for pre-season and got into some discomfort with his ankle. He’s had an operation and thankfully it was successful,” Shakespeare said.

“It’s unfortunate for Robert but we thought it might be worse. We’re expecting him to be out for around six to eight weeks.”

Leicester kick off the new season at Arsenal on Aug. 11.