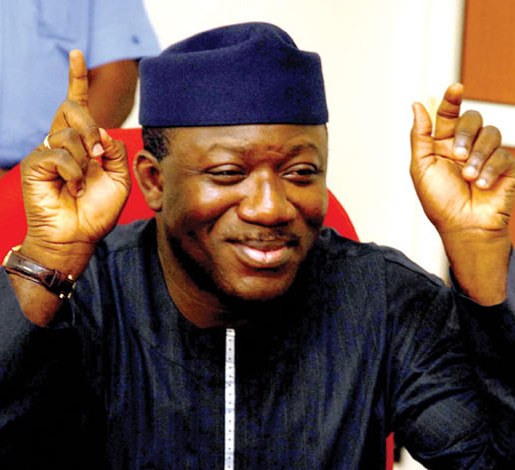 Former Ekiti state governor and current Minister of Mines and Steel Development, Dr Kayode Fayemi on Sunday says he will contest the July 14 gubernatorial election coming up soon in the state under the APC.

He made his ambition known at a news conference at his Isan-Ekiti country home in Oye Local Government Area of the state.

The News Agency of Nigeria (NAN) reports that Fayemi had hosted leaders and scores of members of the party from all the 16 Local Government Areas and the 177 Wards of the state.

He said he was driven by his past records of positive achievements, especially for workers, retirees and pensioners while in office in the state.

He explained that his decision to seek re-election was to deliver the state from incompetent and dubious hands and take her to where its supposed to be.

NAN reports that the former governor becomes the 35th person to formally indicate interest in the governorship poll in the APC alone, aside from dozen others whose campaign posters and billboards are already out on the streets without formal declaration.

Fayemi said he would formally submit his letter of intent to the state secretariat of the APC as soon as the Independent National Electoral Commission (INEC) lifts ban on campaigns on April 15.

On the issue of a White Paper, indicting him for corruption and consequently banned him from seeking public office for 10 years, Fayemi said he was not bothered.

He declared that the said White Paper cannot stop his ambition, describing the document as final result of several months of political witchhunt launched against him by the Ayo Fayose-led administration that cannot stand the test of time.

“Regardless of whatever anybody may think, I know I am eminently qualified to contest the election, if I am not qualified, I would never have come to tell you I want to contest.

“Most of the negative things Fayose and his government said or alleged of me were deliberately concocted out of malice to either malign my character or score cheap political goal; but the truth will always prevail.

“Same goes for the manipulated debt profile of the state which was a clear case of exaggeration and distortions.

“Can you imagine, Fayose said he issued White Paper banning me from holding public office, but today, I am giving him red card. By the end of the gubernatorial poll exercise, we will know who is right between the two of us,” he said.

The Minister vowed to dislodge Fayose and his deputy in the poll if picked at the May 5, 2018 gubernatorial primary of the party in Ado Ekiti.

He advised other aspirants against divisive tendencies by their followers, stressing that whoever that eventually emerged from the coming primary must be embraced by all since the national secretariat of the party had promised that the whole exercise would be open, free and fair.

He promised to use his second-term to correct all past mistakes and improve on the good ones, saying he had learnt his lessons since leaving office about four years ago as governor.

Fayemi, therefore, asked all those he offended while in office as governor to forgive him, while also saying he had forgiven all those who erred against him, in the interest of the party.

He warned Fayose not to attempt to remove or destroy his campaign posters and billboards the way his government was currently doing to some opposition posters.

The minister was however silent on when he would be resigning his appointment as minister from the Federal Executive Council.