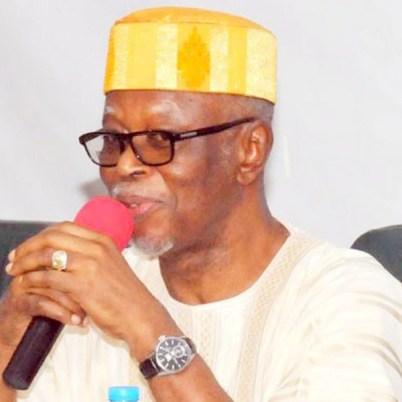 The national chairman of the All Progressives Congress (APC), Chief John Odigie – Oyegun, has said the party will deploy all it has to win the July 14 Ekiti State governorship election.

Odigie – Oyegun, who was in Ado-Ekiti, the state capital, to flag off the party’s Continuous Registration Exercise, which took place at the APC secretariat, said the coming election is a ‘must-win’ for the party.

He assured that the party would conduct a free, fair and credible primary, saying there would be no padding of the delegates’ list or any fraudulent practice that could undermine the credibility of the exercise.

He said the delegates’ list that would be used for the governorship primary had been compiled, and copies would be made available to all the aspirants in due course.

“Though, we are in power at the centre, that doesn’t mean we should not work hard. President Muhahmmadu Buhari as you know him will not rig or compromise or subvert the will of the electorate; so we must work hard to deserve the victory that will come to us,” said Mr. Oyegun.

While speaking to the aspirants and other party supporters at a session, the APC national chairman said there would be no imposition of candidate for the governorship election, urging the aspirants to look forward to a transparent primary.

“To all the aspirants, you must not campaign as if there won’t be tomorrow. Don’t campaign in a way that breeds enmity. I learnt that you are above 30, but the large number shouldn’t be a source of discord,” he counselled.

“Let me say this clearly, anybody who wants to fly the flag of our party must maintain decorum. But we shall be fair to you as much as possible because there can’t be peace when justice is denied.

“We must not also have bad losers, you must work with whoever the electors pick as their candidate.

“The aspirants must ensure that there is no division before and after the primary. We are also barring members of SWC (state working committee) from joining the bandwagon of campaign for any of the aspirants because this can cause further division.”

Oyegun said the party’s choice of Ekiti to flag off the continuous registration programme was strategic, saying this conveyed a vivid and strong message of love for the people of the state.

“I am happy with APC in Ekiti with the level of mobilization from our aspirants. You have shown that you are desirous to join the progressive fold. We didn’t choose Ekiti for the flag off of this programme by accident,” he said.

“We must know that Ekiti is facing one of the most important elections in our history. God has put the victory on our laps, he has put it in our hands and we must not lose it.

“We at the national headquarters have decided that this election is one that we will work hard, leave no stone unturned, because to us this is a must –win election.

“As you know, President Buhari won’t alter or compromise the outcome of election, this shows Ekiti will have free and fair election, so we must be united and work hard to achieve victory together.”

The party chairman was received by a number of party chieftains, including the Minister of Mines and Steel Development, Kayode Fayemi, the Deputy National Chairman(South), Segun Oni, and members of the State Working Committee.

However, Opeyemi Bamidele, Babafemi Ojudu and Bamidele Faparusi, were not present, but sent representatives.