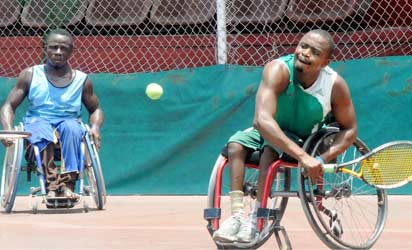 The NWBF’s Secretary, Victor Anusa, in Lagos said that they are Ecobank and Heritage Bank.

Anusa said that the goodwill was in response to the federation’s earlier appeal to cooperate bodies for support.

The secretary, who did not disclose the kind of support coming from Heritage Bank said that “Ecobank promised to give us N20 million for the championship’’.

The championship which will feature 20 teams from Nigeria and six teams from five African countries will hold between Feb. 18 and Feb. 22 at the National Stadium Surulere, Lagos.

The African countries are Ghana, Cameroon, Republic of Benin, Cote d’Ivoire and Togo.

According to Anusa, the money which will be made available to the federation before the event was part of the banks’ social responsibility to the physically challenged.

“It is good omen that cooperate bodies in Nigeria are living up to their social obligations in helping to improve the lot of the less privileged.

“If such an olive branch is extended to other sections of our society by other business entities, the Nigerian society will be better,” he said.

Anusa commended the financial institutions for their support and pledged that the federation would judiciously use it to improve the sporting career of the athletes.

He commended the managerial ingenuity of the federation’s President and former Ogun Sports Commissioner, Bukola Olapade, who made the support possible.

Lagos State Government had also provided accommodation for the over 300 athletes that would participate at the championship.

The first placed team will receive N2.5 million, while the second and third placed teams will go home with N1.5 million and N1 million respectively (VANGUARD)

Inflation rate stands at 8.0 per cent in January, says NBS Amaechi begs new Rivers CP not to be partisan