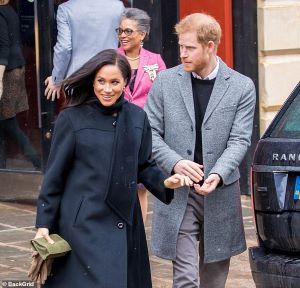 The 86-year-old primatologist has ‘been in touch’ with Harry after he quit frontline royal duties to live in Canada and then Los Angeles with wife Meghan, 38, and baby Archie, 11 months.

The couple are both fans of the world-renowned activist and invited her to their Frogmore Cottage home in Windsor last summer. Dr Goodall believes she may have been one of the first people outside the family to hold Archie.

She is currently in lockdown in Bournemouth where she opened up about Harry and his new life.

I don’t know how his career is going to map out, but, yes, I’ve been in touch – though I think he’s finding life a bit challenging right now,’ she said, speaking to Radio Times. 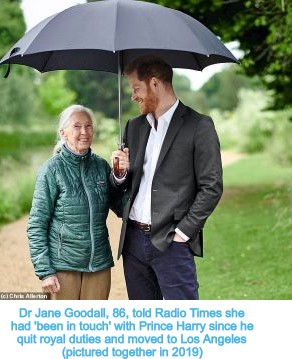 At the suggestion that Harry and his brother William are champions of the natural world, she added: ‘Yes – except they hunt and shoot. But I think Harry will stop because Meghan doesn’t like hunting, so I suspect that is over for him.’

Last week Dr Goodall, who is best known for her studies on chimpanzees, told how the prince had hinted at stepping away from the Royal Family months before the bombshell announcement last year.

She recalled a conversation she had with him last summer at an event to raise awareness of her Roots & Shoots education programme at Windsor Castle.

Dr Goodall said: ‘I made Archie do the Queen’s wave, saying, “I suppose he’ll have to learn this”.

The veteran anthropologist added she was currently enjoying being at home, but replying to emails was more tiring than travelling the world.

Asked whether she was getting restless, she said: ‘No, I hate travelling the way I do, but I still have a message to get out.

‘With all the emails and requests I’m getting, this is actually more exhausting than travelling.’ 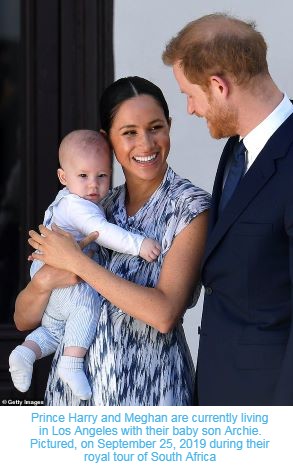 Dr Goodall’s latest documentary The Hope – on National Geographic – examines her 60-year legacy of fighting to save the planet. It also features Harry, who champions environmental issues.

At one point during the 90-minute programme, Dr Goodall is seen mimicking an intimate ape greeting with the prince.

During that interview he said he wanted ‘two children maximum’ and admitted he found what was happening to the environment ‘terrifying’. 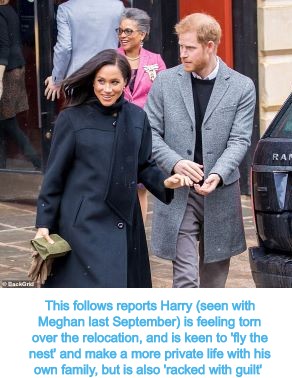 This follows reports Harry is feeling torn over the relocation, and is keen to ‘fly the nest’ and make a more private life with his own family, but is also ‘racked with guilt’.

Prince Harry is said to be struggling with feelings of helplessness after discovering Prince Charles tested positive for coronavirus, a source claims.

The Duke of Sussex, who officially stepped down as a senior royal this week as he strives to give 11-month-old son Archie, and his wife Meghan a more private life in LA out of the spotlight, is said to have had an emotional phonecall with his father, 71.

According to an insider the father-of-one feels ‘helpless’, and is trying to keep regular contact with Charles and the Queen, but the time difference is making it difficult.

A source told Us Weekly: ‘Despite their ups and downs, hearing that his dad is sick with a potentially life-threatening illness is a huge wake-up call. And he’s overwhelmed with feelings of guilt for not being closer to home while this is all going on.’

Charles reportedly tried to calm Harry down bY explaining that he is only suffering from ‘mild symptoms’, but the diagnosis is said to have been a ‘huge wake-up call’.

According to the source the royals are trying to ‘rally together’ amid the pandemic, but are struggling due to the physical distancing rule. 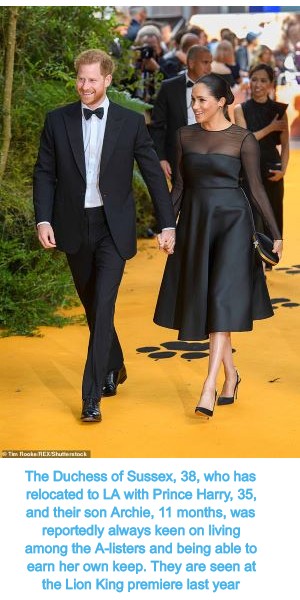 At the beginning of the month further reports claimed Meghan always had dreams of living the Hollywood lifestyle, an insider claiming to be a lifelong friend has said.

The Duchess of Sussex, who has relocated to LA with Prince Harry, 35, and their son Archie, 11 months, was reportedly always keen on living among the A-listers and being able to earn her own keep.

And according the source, Harry is so ‘smitten’ he was open to relocating, having his own ‘fascination’ with movie stars.

A source told The Sun: ‘I think she always wanted to be back here, she always dreamed of the full-blown Hollywood lifestyle and this kind of clout. And I don’t think it was even that hard to persuade Harry.

‘He was smitten and star struck over the whole thing. I don’t think she had to twist his arm to move to Hollywood.’

‘Now she is back home, near her mom, her friends and her PR team. She doesn’t have to ask for permission from the royal family in how she chooses to live her life and she can acquire income in all sorts of fields.’

The royal couple moved to California from Vancouver at the end of last month and were said to be interested in the five-bedroom home.

The firm selling the property have not confirmed news of a royal purchase, but a source claimed to the Sun the property, in one of Los Angeles’ glitziest enclaves, had been sold.

However a source close to the couple has since claimed the reports are ‘categorically untrue’ and that the couple did not purchase the property. 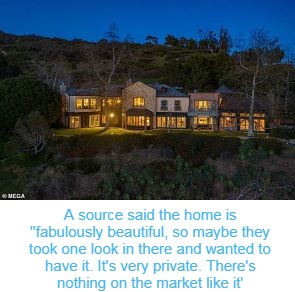