Australia will not cut funding to the World Health Organisation, despite US President Donald Trump‘s decision to stop sponsoring the global health body over its bungled coronavirus response.

Prime Minister Scott Morrison has come under pressure by his own MPs to slash funding to the UN agency, after it was revealed Australia was the eighth biggest voluntary contributor of 71 member countries.

In 2018, Australia paid the WHO AUD$63million, including $9.3million in compulsory fees – a contribution five times bigger than China‘s.

In his announcement on Wednesday, President Trump accused the WHO of being too ‘China-centric’ and said it had ‘severely mismanaged’ the coronavirus outbreak.

The prime minister on Wednesday said he sympathised with Trump’s scathing criticisms, having aired a few grievances of his own, but said he would not be following suit. 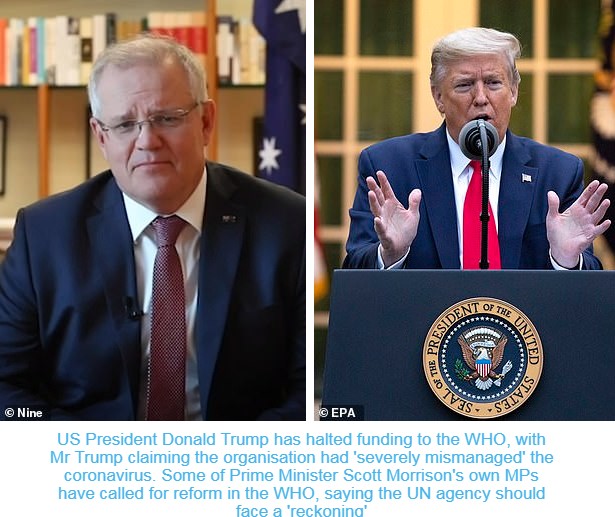 ‘That said, the WHO also as an organisation does a lot of important work, including here in our own region in the Pacific, and we work closely with them,’ he told Perth’s 6PR radio.

‘We’re not going to throw the baby out with the bathwater here, but they’re also not immune from criticism and immune from doing things better.’

The organisation, whose Western Pacific office is based in Manila, works with health authorities in 37 countries across the region, including Australia.

According to its website, the WHO’s latest work with the Australian Department of Health is a ‘Cooperation Strategy’ aimed at improving health in the Western Pacific Region over the next five years.

‘This collaboration is underpinned by three key foundations of cooperation: first, WHO contributes to the health of all Australians; second, Australia, facilitated by WHO, contributes to addressing health priorities in the Region and globally, and; third, Australia and WHO work in partnership to promote better health,’ the website states.

Mr Morrison acknowledged Australia had declared the coronavirus outbreak a pandemic several weeks before the WHO.

The declaration triggered a range of boosted biosecurity and border security measures to stem the spread of COVID-19.

But even before the crisis had reached pandemic levels, Australia had taken precautions by preventing Chinese visitors and students from entering the country in early February.

Those measures were met with criticism by the Chinese embassy in Canberra which even urged the government to lift the travel restrictions, citing the WHO’s recommendations.

‘We express our deep regret and dissatisfaction over the Australian government’s announcement,’ a spokesman said in a statement in February.

‘The World Health Organisation has repeatedly stressed that it does not recommend putting travel and trade restrictions on China.

‘Only Australia and a small number of countries have taken such extreme measures which are an overreaction indeed.

‘We urge the Australian side to … respect WHO’s professional recommendations, and lift the restrictions as early as possible.’

On Wednesday, Federal Cabinet ministers were shocked that, in a further sign of submission, WHO signed off on China re-opening its ‘wet markets’ where COVID-19 is believed to have first transmitted from bats to humans.

‘It’s unbelievable, it’s extraordinary, that the World Health Organisation sees it fit for these wet markets to continue in China,’ Mr Frydenberg said in Canberra.

‘They shouldn’t … they’ve been the source of outbreaks that have killed people around the world.’

There is some confusion about the WHO’s position on wet markets because different envoys have given contradictory positions to various news organisations.

Liberal backbencher Dave Sharma believes Australian funding for the WHO should be tied to ‘necessary reforms’.

‘This reckoning has been coming for some time,’ he told Sky News.

‘I think a lot of countries, Australia included, have been less than impressed with the WHO’s performance.’

Mr Sharma expects countries including Japan, South Korea and Australia to demand changes at the WHO.

‘I think we should make sure we condition our future funding on necessary reforms,’ the former senior diplomat said.

Labor deputy leader Richard Marles agrees there is a legitimate conversation to be had about the United Nations body.

‘But this is not a time to be abandoning it – the world needs a strong World Health Organisation,’ he said.

‘We can have a conversation about issues inside it, but this is not a time to abandon it.’

The size of Australia’s voluntary donations to the UN agency, compared with the rest of the world’s, are laid bare in WHO financial documents.

The paperwork outlines how each country makes voluntary contributions to the health agency, on top of compulsory fees.

Other rich countries such as France, population 66 million, coughed up $14million in donations and Canada, home to 37.5 million people, paid $41.8million, the documents show.

The United States and the United Kingdom chipped in the biggest voluntary donations with the US paying $AUD436.8million and the UK $318.7million.