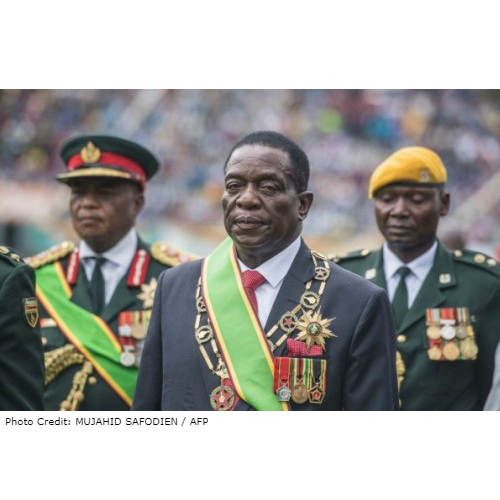 Moyo is one of two army top guns named in the cabinet of new president President Emmerson Mnangagwa. The other is Air Marshal Perrance Shiri who also landed the land minister portfolio.

Moyo appeared on national broadcaster ZBC after the army has seized the facility saying: “We wish to assure the nation that His Excellency Mugabe and his family are safe and sound and their security is guaranteed.

“We are only targeting criminals around him who are committing crimes that are bringing social and economic suffering in the country in order to bring them to justice.”

President Mnangagwa dropped allies of Mugabe’s wife, Grace, but brought back many Mugabe loyalists from the ruling Zanu-PF party, disappointing those who had been expecting a break with the past.
“Zimbabweans were expecting a sea change from the Mugabe era. After all, had there not been a revolution, or so they thought?” Magaisa said.

Mnangagwa chose a veteran cabinet minister to head the finance ministry.  Chinamasa, a lawyer by training, had been finance minister since 2013 until he was shifted to the new ministry of cyber security in a reshuffle this year.

During his time in charge, though, the economy stagnated, with a lack of exports causing acute dollars shortages that crippled the financial system and led to long queues outside banks.

Meanwhile, the cyber portfolio, which got lots of Zimbabweans talking, according to the new cabinet list has been folded into the information ministry headed by a former deputy minister in Mugabe’s government, Supa Mandiwanzira.

“Even #Nigeria didn’t have so many commanders in Cabinet in its coup days!” former information minister and G40 leader Jonathan Moyo, who remains in hiding, said on Twitter.

Mnangagwa is under pressure to deliver, especially on the economy, which is in the grip of severe foreign currency shortages that have seen banks failing to give customers cash.

He told heads of government ministries on Tuesday that he was putting together a “leaner” government, which would see the merging of some departments to enhance efficiency.