TITHING: THE GULLIBILITY AND HYPOCRISY OF THE NIGERIAN CHRISTIAN – By Nkechi Bianze.

Christianity Comments Off on TITHING: THE GULLIBILITY AND HYPOCRISY OF THE NIGERIAN CHRISTIAN – By Nkechi Bianze. 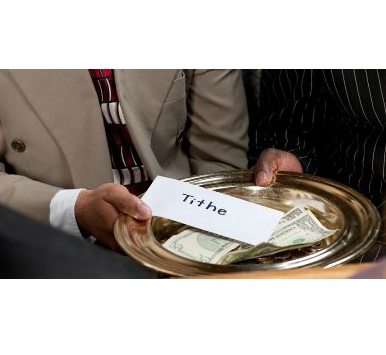 Back in 2013, in my home Church, something happened that changed my whole perspective.  An alter call for donations was made, thus: “Praise tha Lord o. Our Daddy in the Lord is visiting us with his army of Soldiers. We need to look after our daddy very well. We need to lodge him in the most expensive hotel in town for one week. Feed him and mummy, transport him and look after him while he is with us.”

I’m quite fast with numbers, most especially when these numbers are about money. Thus, it took me less than a minute to come up with a sum total of what they expected us to donate so we can “look after” the spiritual leader of the church. We are talking about a fundraising of not less than N25.2 million Naira here. For what? To have the spiritual leader come and preach to us for a couple of hours per week.

I had initially wanted to stand up to walk to the front with my N50k, but I saw myself parking my bag, and walking out of the church. I went out, waved an Okada man, and asked him to take me to the central hospital. I went into the hospital, then asked the nurse if there was anyone struggling with medical bills. I was showed two patients. One was a woman who had just put to bed, and two was a child who had just been treated for malaria. I gave them N15k each. The child could now be allowed to go home. His petty trader single mother almost rolled on the floor thanking me. What for? N15k? It was embarrassing as well as fulfilling…. I actually dropped a tear. I took a bike to the car park, saw a crippled beggar, he was carrying his plastic plate begging the food seller for food. I gave him N5k and also brought him food.

I went back to Church to join my parents, just like nothing happened. The following day, I went to the primary school I attended at some point, greeted the head teacher, and asked if there was any student struggling financially. I was showed some. I chose three. I gave each of them N10k.

I ended up spending over N65k on strangers who needed my money the most. I paid hospital bills, fed a beggar for at least one week, and paid tuition fees for three.

Any God who thinks that I should be in hell because I didn’t enrich an already stinking rich man who is a thousand times richer than myself and my parents, but rather gave that money to the poor, is a God I never want to have anything to do with.

This was the beginning of it all. I don’t believe in tithing. That’s a modern-day religious scam. But I do “tithe”. Everything that I should have dropped in the Church accounts goes directly to the poor. I pay tuition fees for people, I pay hospital bills, and I feed the poor. All these I do whenever I have the money to do it.

After this experience in 2013, I felt so happy within myself. I felt an inner Joy. I still feel joy within each time I remember that I have put and keep putting smiles on the faces of people who almost had no hope at some points, just with my N10k, N20k, here and there.

So, I made a vow in 2013 that love is going to be my religion where I would be paying my tithe and offerings to people, mainly strangers that won’t recognize me again some hours after.

Even the Bible says, whatsoever you do to the least of thou brethren, so you do unto me. Jesus Christ gave more than he received.

The early missionaries that brought Christianity to Nigeria gave more than they received. They built schools, hospitals, and churches for free. They did a lot to improve human lives, and asked for nothing back…. only believe.

But the opposite is what we have amongst Nigerian pastors these days. They make their gullible members milk cows to enrich themselves. What is a sane man, who goes by the title “GO” in a country where many only survive on less than a dollar a day doing with four private jets? That has gone beyond greed, that’s insanity! And Nigerians keep enabling these brands of insanities.

Nigerian pastors and GOs will continue getting richer for as long as the average Nigerian Christian remains gullible. This gullibility is simply self-inflicted-mental-laziness. You have refused to think with your brains, so these GOs think for you. And they think for you to their own benefits.

I don’t give in Churches anymore. Heaven knows I won’t give a dime to a multi-billionaire pastor while there are still beggars on the streets. Nigerian Christians need to start using their brains.

This is URGENT! Think man, think woman, because no one ever died of thinking critically with his or her brain. Even though I become a billionaire today, no Nigerian pastor would get a dime from me. My “tithes”, arms, offerings, and seeds would all go directly to the poor in my society. Not to some of the richest people in the world.

O Islamic Scholars, Speak the Truth, Even If It Is Against You! - By Murtadha Gusau Ekiti Politics: 500 PDP, ANPP members join APC