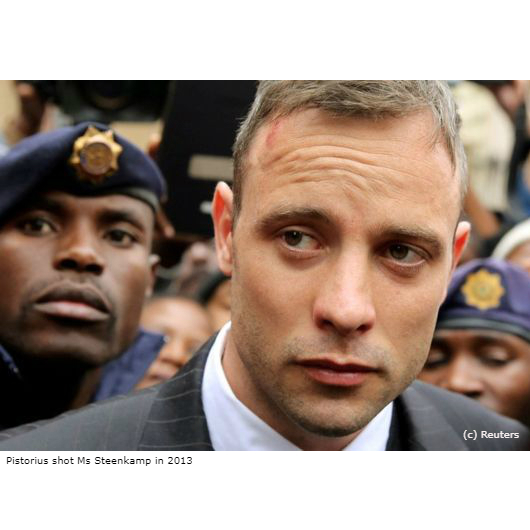 Prosecutors had argued that the six-year term for murdering Reeva Steenkamp was “shockingly light”.

Ms Steenkamp’s parents were “emotional” as they watched the ruling at home on TV, a spokeswoman said.

“They feel there has been justice for Reeva. She can now rest in peace,” Tania Koen told Associated Press.

“But at the same time, people think this is the end of the road for them… the fact is they still live with Reeva’s loss every day,” Ms Koen said.

Oscar Pistorius claimed he shot dead Ms Steenkamp on Valentine’s Day in 2013 after mistaking her for a burglar.

The Supreme Court of Appeal in Bloemfontein has now given Pistorius the minimum 15 years prescribed for murder in South Africa, less time already served.

The lower court had justified the six-year sentence by citing mitigating circumstances such as rehabilitation and remorse. It said they outweighed aggravating factors such as his failure to fire a warning shot.

Pistorius’s brother Carl said on social media that he was “shattered. Heartbroken. Gutted” at the decision.

“We have all suffered incomprehensible loss. The death of Reeva was and still is a great loss for our family too,” he wrote.

Oscar Pistorius, 31, was not in court to hear the decision.

He was initially given a five-year term for manslaughter in 2014, but was found guilty of murder on appeal in 2015.

Pistorius shot Ms Steenkamp four times through a locked toilet door at his home in the capital Pretoria.

Previously, the six-time Paralympic gold medallist had made history by becoming the first amputee sprinter to compete at the Olympics, in 2012 in London, running on prosthetic “blades”.

He had his legs amputated below the knee as a baby.

There is huge relief here from the National Prosecuting Authority and from Ms Steenkamp’s family and friends. Prosecutors are relieved because the earlier sentence of six years for murder could have set a precedent in future trials. The Pistorius family are devastated, as is the athlete himself.

The six-year sentence gave an impression of inconsistency. There have been fraud and corruption trials that led to 15-year sentences. It seemed lenient considering that the Paralympian fired four bullets into a bathroom door behind which there was an unarmed and frightened Ms Steenkamp.