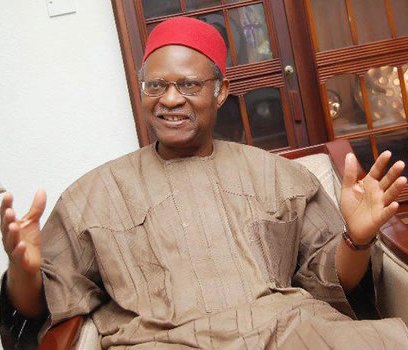 In the face of the current harsh economic situation in the country, youths have been advised to embrace education and entrepreneurship to eradicate poverty.

Some of the experts, who were facilitators at the recent youth forum organised by RISE Networks as part of the Nigerian Commemoration of the United Nations International Youths Day 2016, dwelt on the role of youths in tackling the challenge of massive poverty in the country.

Speaking on the theme of the event, ‘The Road to 2030: Eradicating Poverty and Achieving Sustainable Production and Consumption’, the Chairman of the occasion, Chief Emeka Anyaoku, a former Secretary General of the Commonwealth, said if the country is to successfully reduce the current high level of poverty, youths must play an active role in three areas of politics, including governance; social change, including change in societal values and ethics; and economic activities, especially entrepreneurship.

In politics, he urged the youths to mobilise themselves and channel some of their youthful enthusiasm and activism into clamouring for the restructuring of the country’s governance architecture in order to realise a truer federalism that will give the country greater political stability and faster socio-economic development.

Anyaoku regretted that the Nigerian society in its present state is in great need for social change, as corruption pervades all levels of society, starting from examination malpractice to bribery and seeking for gratification before performance of one’s obligatory duties to outright embezzlement and stealing of public and private funds.

He therefore urged the youths as powerful agents of positive change to be in the vanguard of a campaign for the restoration of the societal values and ethics that guided people’s behavior in the past.
In terms of entrepreneurship, he noted that the massive poverty that exists in the land today is closely linked to the unacceptable level of youth unemployment which he described as a disaster waiting to happen to the fabric of the society.

“To effectively address the challenge of youth unemployment I believe to progress towards poverty eradication now and as we move to 2030, our youths must embrace entrepreneurship; there are I believe vast opportunities to be tapped in the sphere of agriculture and agro-based industries and also in small and medium scale manufacturing of the utilities that we hitherto randomly import.”

He urged RISE to explore with institutions like the Central Bank of Nigeria and the Bank of Industry, as well as private foundations in the country that had indicated their willingness to assist the development of small and medium scale enterprises.

In her remarks, the Director, Legal, Public Affairs and Communications, Nigerian Bottling Company Ltd, Mrs. Sade Morgan, stressed that for youths to be empowered to play the role, they need education.
“They need role models among Individuals, governments and companies to mirror what sustainable consumption entails and how to increase the eco-efficiency of consumption of products, minimise waste and pollution to achieve equitable socio-economic development.”

She said youth development is one of the focal areas of the company’s corporate social responsibility framework among water stewardship and women empowerment; this she said informed the collaboration with RISE Network to mark the day to share the importance of education in developing the country.

“NBC recognises that the future will be shaped by today’s young people so, NBC gives special attention to providing opportunities for these youths between the ages of 5- 35 to realise their full potential.”
Morgan said the company’s intervention in the nursery and primary school level is largely in the provision of educational infrastructure and back-to-school materials and support of annual inter-house sports/fun days.

In the secondary school level she said the company provides educational infrastructure in partnership with state governments; while at the university and post-graduation stage, it focuses on developing leadership skills “and we support capacity building workshops such as the Campus Life Workshop for undergraduate students with a flair for writing and journalism from campuses all over the country bi-annually.”

In the area of vocational training and entrepreneurship, she said to ensure that no category of the Nigerian youth is left out, the company also supports vocational training for out of school youth with a project like the Lady Mechanic Initiative. “These programmes have benefitted directly over 10,000 young Nigerians and another 100,000 indirectly over the last five years.”