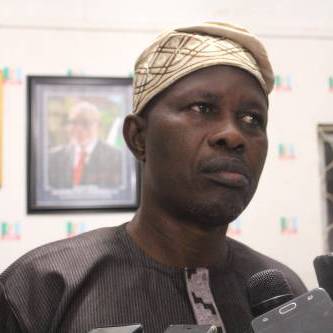 Ade Adetimehin, the embattled Acting Chairman of the crisis-ridden All Progressives Congress (APC) in Ondo State has said the era of indiscipline and impunity in the governing party is over.

Mr. Adetimehin added that the leadership of the party will not also tolerate any act capable of causing disunity and disaffection among the members and those who had already left the party.

He disclosed that those who worked against the interest of the party during the 2016 electioneering period and governorship election should be magnanimous to tender an unreserved apology.

The APC Acting chairman who spoke to journalists on Friday after addressing members of the State Working Committee of the party in Akure, the state capital, said some ‘forces’ that worked against the party while in opposition are now returning to cause a division.

He mentioned that the ousted Chairman of the party, Mr. Isaacs Kekemeke and Senator Ajayi Boroffice, representing Ondo North Senatorial District strategically left APC to work for Mr. Olusola Oke as the candidate of the Alliance for Democracy (AD).

The duo, according to Adetimehin, also plotted with Mr. Bola Ilori who served as the Director General of the Olusola Oke Campaign Organization with the intention to weakening the chances of the APC during the 2016 gubernatorial election.

Sahara Reporters correspondent reported that Mr. Adetimehin was speaking in a reaction to a purported statement credited to Senator Boroffice, claiming that the letter recognizing the former as Acting chairman of APC in the state was fake, and did not emanate from the party’s national secretariat.

Speaking further, Adetimehin maintained that both Boroffice and Kekemeke were visibly against and refused to campaign for the candidature of Mr. Rotimi Akeredolu who vied on the platform of the All Progressives Congress (APC) and emerged as the governor.

He later explained that he has the support of the party’s structure in the state as against the claims by Boroffice and Kekemeke who are hellbent on causing confusion and crisis in the ruling party.

He also added that the party would no longer condone any act of impunity and asked those who left to apologize to the members and leaders of the party before they would be resolved and welcome back into the party.

“He (Boroffice) has a means of cross-checking from the National Secretariat (about the letter confirming me as the Acting Chair) but the question is, does he still believe in the APC?

“During the last election, same Boroffice worked for Alliance for Democracy (AD) in Ondo state but at the National level, he will be claiming he is in APC and that is the problem with morality in the Nigeria’s politics.

“Some play politics without ideology but I did not expect him (Boroffice) who is a Professor of repute and Senator of the Federal Republic of Nigeria to lie to the whole world and also deceive his followers.”

“When you make a mistake, apologize, and if you worked against your party- come back to that party and tender your apology, and the people would pardon you.”

“During that 2016 election, Boroffice did not participate in any of our campaigns and we have 203 wards in Ondo state, try and ask him did he visit any of these wards to campaign for us.”

“We also have 3009 polling units, ask him again did he ever visit any of these units to canvas for APC but instead, he was working for Alliance for Democracy (AD). So, I am not surprised if a man of his status and caliber will come openly to deceive the people.”

The Acting Chairman further stated that despite the internal crisis, the governing party in the state would still be prepared to mend the fence with the wary factions who left in annoyance but are now ready to come back and show some signs of apologies.

Earlier, Senator Boroffice had said he is still a member of the All Progressives Congress (APC) in the state and did not join any other party as being claimed by his antagonists.

He spoke in an electronic statement issued through his media aide, Kayode Fakuyi, and issued to journalists in Akure on Thursday.

Boroffice said he is still a grassroots politician and a leading founding father in APC in the state.

“The Senator remains a chieftain of the APC in Ondo State and has not at anytime resigned his membership of the party nor at any moment joined another party.”

“As a grassroots politician and one of the founding fathers of APC in the state, if he has any reason to join another party, it will attract statewide rallies and political carnivals,” he said.