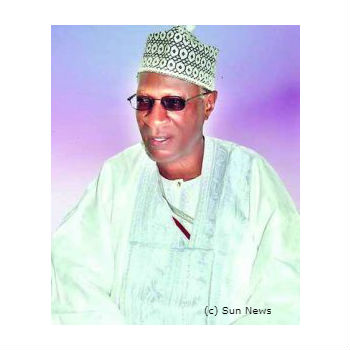 Group Captain Salaudeen Adebola Latinwo (Rtd) was the military governor of Kwara State during the Buhari/Idiagbon regime in 1984/85.The former governor has maintained a low profile since disappearing from the public radar. In this interview, he bares his mind on sundry issues.

How would you rate the fight against corruption in Nigeria?

You would have observed that the anti-corruption agenda of Mr. President has been manipulated by few of those in authority when he was away. The people undoubtedly took advantage of the brief absence of Buhari to take laws into their hands. But now that he is back, he should hold firmly to his position of eradicating corruption as much as possible from our society. This is one of his main cardinal programmes and he should not allow the corrupt elements in our midst to have the upper hand and thwart his efforts. Regrettably, corruption has infiltrated the polity. All of us should give him the desired support to stay on track.

What is your take on the widespread clamour for restructuring of Nigeria to ensure peace, stability, and development?

Well, I would say that those clamouring for division, restructuring and outright secession at this time should have a deep rethink and look back at issues and face the reality because the violence, destruction, and crisis that are associated with such demands could be catastrophic. The result could be disastrous and lead to total collapse of all existing structures. Therefore, to prevent all these from happening, we should channel all our grievances to the appropriate quarters. Incidentally, we have a listening President and I am sure that if all the grievances and issues are adequately presented to him, he will address them. We must not try to move the hands of the clock backward. What God has joined together, let no man put asunder. Instead of talking about restructuring or secession, our motto should be unity. In a nutshell, the issue of restructuring should wait, so that Buhari can concentrate more on issues like security and unity of the country. However, there is nothing wrong talking about restructuring, only that it should be implemented later. There is always time for it. We must talk about laying the foundation before going into restructuring proper.

When do you think is the right time to restructure Nigeria?

As I said, President Buhari is currently working to lay a good foundation for the country. And fighting Boko Haram and corruption are his main agenda. After that, more can follow. With the way things are going, restructuring would be a distraction for him. Agreed that there will be no love, peace and unity when there are grievances, however, I am of the view that all the grievances should be tabled for discussion at the National Assembly. We cannot start to agitate for that now.

What are the implications if the state of insecurity continues this way in Nigeria?

The less understood aspect of violence in Nigeria is the everyday threat that an increasing number of citizens are facing. Nigeria may continue to become far more dangerous as the supply of machine guns, rocket propelled grenades and mortars become easier to access. The increasing number of the unemployed and impoverished people will in turn increase the level of crime and general insecurity. Indeed, there is no reason at present to believe that the police and other security services will become more adept, especially given the funding, crisis and the level of training and commitment of the police and the armed forces. So, urgent decisions need to be taken in order to save the ship of this nation from sinking.

How best can the state of insecurity be tackled?

For the activities of Boko Haram, insurgents and other security threats to be curbed, there should be unconventional military strategies. Unfortunately, the insurgents live among the people and are difficult to be fished out, that is why the military is finding it difficult to give them the deserved attack. So, the solution is that a different approach should be applied. The military must re-group, reorganize, retrain and re-strategize to face Boko Haram, which, of course, the military formations have started doing. On the other hand, the people need to support the entire security operatives by providing them with useful information.

What steps should be taken to make Nigeria great again?

Obviously, the most important function of government is to provide security for the lives and property of its citizens. Thereafter, we should be talking about infrastructure like roads, health care, education, industrialisation, job creation and others. I believe that Nigeria will not sink anymore, if government is more assertive, committed, disciplined and employ positive approach to issues, with adherence to the rule of law, human rights, fairness and justice, creating a society where everyone will have equal opportunity to be upwardly mobile. Also, the presence of trained professionals, strength of civil society in promoting democracy, capabilities of the Nigerian Armed Forces, Police and other security agencies have potentials to enhance better performance of the country and shape its future. It could be seen that Nigeria is poorer today than she was at independence. But, if we are determined to live, work and suffer together, we will overcome all the difficulties shortly.

Reform efforts will continue to be complicated by structural obstacles. So, the path to Nigeria’s greatness right now is peace, love, unity, accommodation and tolerance. What we need are purposeful leaders who will see the country in the right perspective and have the courage to raise it to greatness, because we already have the potential and ingredients to achieve that.

You worked with Buhari as military governor of Kwara State; does he still possess the sterling character and attributes of someone ready to fight corruption?

President Buhari is a man to trust at all times. He is an epitome of truth and firm in his decisions. He is also courageous and believes in himself. When his government was overthrown in 1985, he remained confident and committed as a patriot till he was voted back to power in 2015. Certainly, he means well for the country and hopefully, he will make the desired impact on the economy. I think he is doing his best. As I rightly said, Buhari’s word is a great asset and honesty is his greatest virtue. So, with him, Nigeria will be better fixed, no matter how long or rigorous it may be.

Assess government’s handling of the crisis of confidence and unity among the Nigerian ethnic nationalities?

I think the way Mr. President is handling the issues of unity and peace among Nigerians is relative. His speech on arrival from medical vacation in London was precise and straight to the point. He addressed important burning issues of unity, peace and love and the need to keep Nigeria together as one entity. I believe well -meaning Nigerians should also support his position. You see, we have a lot to gain and benefit by staying together as a united country and much more to lose by breaking into smaller states or nations. Many things have gone wrong in the country and we had corrupt elements manipulating things.

How do we regain a hate-free Nigeria?

It is certain that we need to show love towards one another for us to live as one. Meanwhile, the love must be based on understanding, creativity and goodwill for all men, irrespective of tribes, religion and class. The love should also seek nothing in return. We must also refuse to do anything that would bring down another individual or a group of people. Hate for hate only intensifies the existence of hate. Nigerians should cut off the cycle of hate and inject element of love.  I have always said that we need to be disciplined in Nigeria because no society and organisation can work effectively without applying discipline and orderliness as guiding principles.

Would you say Nigeria is winning the fight against Boko Haram insurgency?

Yes, I will say that the Boko Haram insurgency was degraded significantly shortly before Buhari left Nigeria for medical treatment. Though, I am not sure what the position is today, but it appears from the reports made available that there is considerable push back. So, we need to consolidate on that by putting in greater efforts and working harder to gain more grounds, so that our people in the north-eastern part of the country will feel substantially secured. As a result, the military and security agencies should join hands together and make good use of intelligence reports and reduce the pressure we are having with Boko Haram.

How do we curb the spate of kidnapping in Nigeria?

Obviously, kidnapping is evil and primitive. It is a dent on the image of the country. Therefore, I’m of the opinion that all the security operatives should ensure that all the culprits are apprehended and made to face punishment. People should also provide useful information particularly on strange movements in their neighbourhoods to the police or military authorities. It is a disgrace to see that there are incessant kidnapping and ritual killing in our society, even in the 21st century. We must do everything possible to kick kidnappers completely out of our society. Also, our laws should be amended and strengthened in such a way that anyone caught kidnapping or engaging in ritual killing should be given severe punishment.

What is your assessment of the Nigerian economy?

The economy is gradually picking up, and if that continues, it will be of great benefit to all and sundry. It is true that we are going through hard times now, certainly, before good things come, there will be elements of pains. We need to bear the pain now, hoping to see the gain thereafter. There will definitely be a bright light at the end of the tunnel. What is needed at this moment is unalloyed support of the National Assembly as well as well-meaning Nigerians for the government to succeed. I’m happy there is substantial support from the state executives, and we need to consolidate on that.

What is your advice to President Buhari on how to hold the nation together?

Mr. President is a father and should therefore act as one. He should not give anybody room to doubt him; that he is not a father to all. He should be able to do it anytime, any day by embracing every group in Nigeria. He should visit them and dialogue with them on issues of common interests. If he does that, he will succeed in having the support of all and by so doing, there will be peace in the country. Also, Buhari has the attributes to unite and win the hearts of Nigerians. He should consolidate on security, economic growth and peace in the country.

The government needs to make more concrete arrangement to ensure that a good number of Nigerians are gainfully employed and provided with housing and other essential needs of life. There is no point having a high number of jobless people walking the streets everyday doing nothing, that would make them easily available as recruits to any individual or group who wants to create trouble for selfish reasons.