Maina: Mr. President ordered AGF Malami to meet with me, ensure my reinstatement

More News Comments Off on Maina: Mr. President ordered AGF Malami to meet with me, ensure my reinstatement 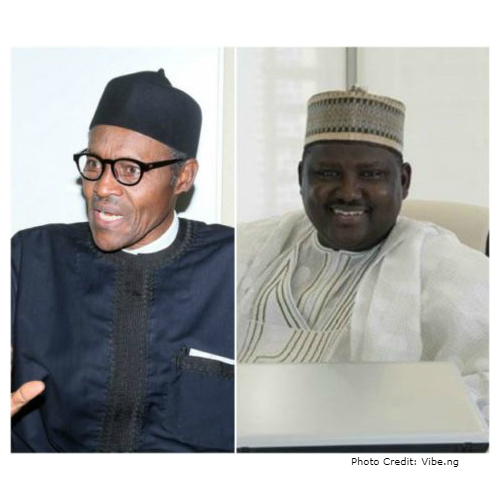 The embattled former chairman of the Presidential Pension Task Team, Abdulrasheed Maina, on Tuesday said his reinstatement started with a meeting with the Minister of Justice and Attorney-General of the Federation, Abubakar Malami, as ordered by President Muhammadu Buhari.

In a video aired by Channels TV on Monday, Mr. Maina, wanted for alleged corruption, explained how the current administration held meetings with him and returned him to the civil service.

His secret reinstatement, exposed in October by PREMIUM TIMES, outraged Nigerians and raised questions about the Buhari administration’s seriousness about tackling corruption.

The president responded to the report with alarm, and ordered an immediate investigation as senior government officials directly involved in Mr. Maina’s recall traded blames and denied responsibility.

Despite receiving the report of the investigation, the president has not sanctioned anyone for the scandal till date.

In his first known public comments, Mr. Maina appeared to imply the president merely feigned ignorance to pacify a roiled public as he was not only in the know about his reinstatement, but he ordered it.

Mr. Maina said he initially decided not to return to work despite a court order reinstating him because some people in the past administration did not want him back.

“The letter of dismissal, I didn’t even receive a letter. It was when I heard about it (that) my lawyers went to court. They took the Senate to court and the court quashed whatever was the report of the Senate. The court also removed all the warrant of arrest. The court upheld that I should return to work. That was in April 2013. But the last administration refused to take me back to my job. They refused to obey the court order. The Head of Service was asked not to return me to the office. The Federal Civil Service Commission chairperson at that time did not want me to return to office.

“Now I did not return to office but when this government came in, the president gave his note that go and sit down with Maina, I’ve given you the approval. They sat down with me after the security agencies cleared me of any wrong doing.”

Mr. Maina said he has never been sued in any court of law for any allegation.

“I have sued all the security agencies that we are talking about and I have won. I have full court judgements. They place my name on INTERPOL, I went to court and removed it. They did this, I did this I removed it. There is nothing they have not done. Even the one they could not do, they went to immigration, put my name on no fly list. I went to the airport. I was in Nigeria, that was in 2015. I went to the court, the court granted me N2 million damages for not flying that day.”

He relayed how he helped the government recover N1.3 trillion through the AGF.

He added that the process of his reinstatement started after the Attorney General, Mr. Malami, visited him.

“As soon as this present government decided to sit with me, and after sitting with, me, I told them I will not leave you to go back to Nigeria without something in your pocket. I’m going to give you something in your pocket and the Minister laughed. The Minister of Justice said what are you going to give us as gift? I gave him a document, I say go here, here, here, there’s N1.3 trillion they are going to steal it because they’ve been stealing every year. He was shocked, he said not possible. I said sir, with all due respect, could you please try it, this is a gift I’m giving you. I haven’t gotten to Nigeria, I’m just giving you a gift. I say try it for you to understand where I’m coming from.

“I’m not a saint but I try as much as I can to help the system. The minister thought that won’t be possible, when he got back, he realised I gave him a correct information. Now, after giving him this information, he asked me, when are you coming back, I said I will soon be back. I said I have a court order. So, I asked my lawyer to write a petition. He now wrote a petition to government and the Minister set up a committee to look at the petition. They looked at the petition and recommended that this is a court order that there’s no question of going back on it, nobody has appealed it since 2013 so government must obey it.

“So, he sent a letter to the Federal Civil Service Commission to say this is the petition I got in my office, I’m attaching the court order which you must respect. I’m hearing people are saying he’s directing people to reinstate me. No, he said you must respect the court order, this is the court order because he is the chief officer of the country. Now, the document was taken to the Federal Civil Service Commission. I went to the Federal Civil Service Commission, they told me they have just received the documents, they are going to see me later and we have a meeting. After that meeting, they wrote office of the head of service. They say we want you to sit down with your Senior Staff Committee and after that you send it to the Ministry of Interior; that was used at that time because they were coerced which I later found out. The Senior Staff Committee was coerced by the then Head of Service, Mr. Isa Bello Sanni to make sure they send me out and packing because I had stopped the inflow of 5.2 billion monthly to the office of the Head of Service.”

The Special Adviser on Media and Publicity to President Muhammadu Buhari, Femi Adesina, refused to comment on the allegation.

Reached Tuesday night by phone, he told PREMIUM TIMES, “Anything on that issue, get in touch with the AGF”.

The Attorney General did not respond to phone calls. His spokesperson, Salihu Isah, could not also be reached as his telephone line was switched off.