Entertainment Comments Off on Life begins for Banky W and Adesua, after real ‘ Wedding Party ’ 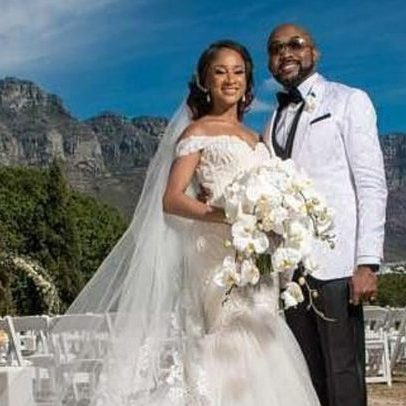 Theirs is what Cinderella stories are made up of. From acting alongside each other as husband and wife in a movie, ‘ Wedding Party ’, Banky W and Adesua Etomi, in a CapeTown, South Africa destination wedding culminated their journey as man and wife last Saturday.

Tagged BAAD 2017, their destination ‘Wedding Party’ which culminated an introduction and Traditional Wedding and court wedding, was attended by a horde of Nigerian celebrities, continuing the star-studded nuptials.

Last December, movie goers saw Banky W and Adesua tie the knot in a movie titled ‘Wedding party.’ At that point, tongues wagged about the relatonship between the duo. But months later, the couple, out of the blues, announced their engagement. It was the beginning of what has been dubbed ‘wedding of the year’ in some quarters.

For better or for worse, both Banky and Adesua have become one. On Sunday, in synchrony, they shared pictures of the preparations to leave for their wedding reception on Instagram. In a video posted by Banky, he is seen walking up to Adesua where she was turning and posing for a video, before holding her at the waist from behind and spooning her to himself.

When you try to photobomb ya wife only to find out it’s a video,’ wrote Banky who wore Mai Atafo suits throughout the wedding.

.‘Lol my eventual reply was “ehnnn they shld take the video like that”.’

Aside the privacy they would enjoy together, as both are public figures, their life would also be in the limelight. Already fans have started talking about their wedding.

Despite the picturesque setting of white chairs in a garden with the hills and blue skies in the background, some fans said the wedding was over-hyped and turned out bland and the couple’s traditional wedding, a week earlier in Lagos, was better.

‘The white wedding looks so boring,’ wrote Rokia2 on Nairaland.

‘The traditional was bomb AF.’

Other fans also criticised the Capetown venue of BAAD 2017, and wondered why the couple took their white wedding to South Africa.

Responding to a post, a fan on Nairaland said, Positivetaught questioned why a wedding can’t be held in Nigeria again.

“Does it now means Nigeria is now so as worthless n of so love little value to us that we can’t be proud enough to host an ordinary wedding at home again, only S/A is worthy enough?’ He asked.

‘I mean y couldn’t this wedding was held in Obudu Ranch, Tinapa or any other choice location in Nigeria. Where is our pride n when the south Africans looks down upon us as a country n treat our people with disdain we would take ofense, forgetting that we are firstly insulting ourselves with this stupidity.’

In this light, the couple have also received advice to be wary of social media.

But will the limelight allow them rest.

While Banky and Etomi have concluded their ‘real’, the saga in the ‘movie’ wedding continues with the premiere of ‘Wedding Party 2: Destination Dubai’, the sequel to the movie, ‘Wedding Party’ which is slated for December, 10, 2017 in Lagos before it starts showing in cinemas nationwide by December 15, 2017.

From the trailer, fans expect to see a Banky W and an expectant Adesua.  In this guise, the movie would be a play of fiction on reality because in real life, the couple’s union will just be settling into its first month.