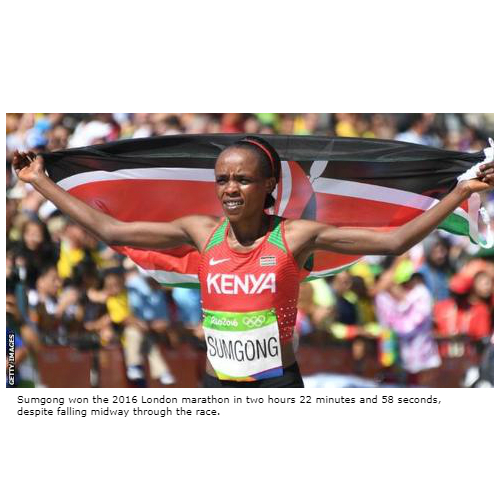 Olympic marathon winner Jemima Sumgong has been banned for four years after her claim she was taking EPO for an ectopic pregnancy was rejected.

Sumgong told a Kenyan law court she was given the banned substance in hospital, but her paperwork was deemed to have been provided by “an imposter” and her claims labelled as “not authentic”.

She also said her husband did not know about the pregnancy because of the “taboo” surrounding the condition.

Sumgong was first suspended in April.

EPO, or erythropoietin, is used commonly to boost the production of red blood cells and encourage more oxygen flow in the body.

The hearing – brought to Kenya’s Sports Disputes Tribunal by the country’s anti-doping agency (Adak) – ruled that 32-year-old Sumgong owned up to her “unfortunate offence and unintended mistake”.

However, the chief executive of Adak told BBC Sport that Sumgong – who also tested positive for a banned substance in 2012 – was “not cooperative and did not give any information”.

“She has received the sanction she deserves,” Japhter Rugut said.

“If the athlete had maybe assisted in the investigations and in revealing what happened, then there could have been a consideration to repeal the sentence. There was no such assistance from her.

“We believe in the interest of justice. This had to be done. It will become a deterrent for anybody who may believe in doing this [doping].”

Sumgong, the first Kenyan woman to win Olympic marathon gold, was officially banned on 31 October but it will be backdated to 3 April. It means she will not be able to defend her title at the 2020 Tokyo Games.

How did it happen?

At the hearing, Sumgong claimed she had received the EPO at the Kenyatta National Hospital (KNH) on 22 February of this year.

However, the hospital said this would not routinely be the case and that any patient admitted for an ectopic pregnancy case would be in hospital for a minimum of four days.

Sumgong did not disclose the EPO on her doping control form and did not present documents that would have been given to her when she was discharged detailing her treatment – leading the hospital to claim that the doctor who signed the paperwork she did provide “could only be an imposter”.

A countrywide doctors’ strike was taking place at the time, which Sumgong said was the reason she could have been treated by an ‘imposter’ doctor.

This argument was rejected by Adak, who pointed out that athletes had access to the nearby Armed Forces Memorial Hospital but that Sumgong opted against this.

What more is being done to combat doping in Kenya?

Kenya was last year deemed “non-compliant” by the World Anti-Doping Agency, but was reinstated before the Rio Olympics in 2016.

Between 2011 and 2016, over 40 track-and-field athletes from the East African country failed doping tests.

Rugut told BBC Sport more is being done to tackle the problem, pointing to the creation of an investigations unit focused on doctors, coaches and “athlete support personnel”.

“As we take action on the athlete whose samples have been found positive, we also want to weed out the others who may be involved in supporting this illegal activity,” he said.

Sumgong, who won last year’s London Marathon, is managed by Rosa Associati, which was suspended by Athletics Kenya in April 2015.

BBC Sport understands that Sumgong has not appealed against the decision.