Fayose, police bicker over alleged cover up of killer motorist

More from Ekiti Comments Off on Fayose, police bicker over alleged cover up of killer motorist 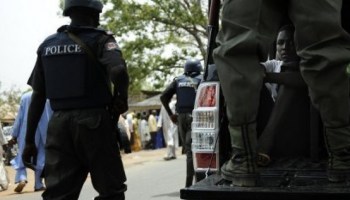 The Ekiti State Governor, Ayodele Fayose, on Wednesday criticised the Commissioner of Police, Abdullahi Chafe, for reportedly covering up the killing of two persons and the injuring of several, by an alleged drunk driver said to be an officer with the Nigerian Customs Service.

The customs officer, whose identity is yet to be known, was said to have overrun a shop at Ayetoro Ekiti on Tuesday, killing two, Emmanuel Owaremi and Titilayo Omotoso; and inflicting injuries on others.

It was gathered that another victim, Bukola Aboko, lost her five months pregnancy in the accident due to the severity of the bodily injuries sustained in the accident.

Residents, who were incensed by the deaths, attacked the driver.

According to witnesses, the man would have been lynched but for the timely intervention of the police.

Aggrieved that the police released the man without charging him to court, the residents stormed the Ayetoro police station in protest.

Some of the family members of the victims were allegedly rounded up by the police and charged to court for breaching public peace and for allegedly attacking the police station.

Fearing they had been denied justice, the family members on Wednesday took their protest to the Government House in Ado Ekiti to seek the intervention of the state governor, Ayo Fayose.

A spokesperson for the two families, Adeola Abiodun, said the police withheld the remains of the victims and forced the families to withdraw their interest in pursuing the case in court before they could secure release of their bodies for burial.

“We were made to write the letter under duress and we had no choice because we were constantly harassed by the police,” he said.

Reacting to the report, Mr. Fayose, said he was saddened by the weighty allegations against the police.

He lamented that the Commissioner of Police could not give a satisfactory answer when he was confronted with the facts of the case.

“I am saddened by this development. Those who are supposed to be protecting us shouldn’t be oppressing us. When people face this kind of trauma, this kind of sad experience, the killing of their breadwinner, husbands and for any reason, a right thinking person should not cover it up. We must stand up against this. These people must get justice,” he said.

“A man killed two of their family members, rather than charging the suspect who occupied the car to court, the police charged the family members of the deceased to court. I want to assure Ekiti people that we will get to the root of this matter.

“For anyone trying to cover this up, that would only be for a very short time. You can see the young lady, who was also hit by the car. She was pregnant and the foetus has to be evacuated to save her life. So, for the police to release the suspect who owns the car is unacceptable.

“I have summoned the Commissioner of Police but I am not satisfied with what he said. There is a cover up everywhere. It is becoming a recurrent decimal. The police must wash their hands clean of this mess.

“How can they ask those who lost their son and relative to write an affidavit indicating that they are not pursuing the case any longer. This was done to cover up the crime. It is also funny that the police commissioner has withdrawn his men from the town. How can you say because the towns people reacted to what you did, you now withdraw all your men and render the town insecure,” the governor said.

Reacting to Mr. Fayose’s allegations, the police in Ekiti said the governor got it wrong.

The Police Public Relations Officer, Alberto Adeyemi, said the governor’s statement suggested that the people who were set to lynch the driver as soon as the accident happened, ”should have been allowed to do so without the police rescuing him.”

“You need to go to the police station and see how they vandalised the place and destroyed the vehicles,” Mr. Adeyemi said.

“The man has been charged to court and we are not to tell the court what to do. Our duty is to charge the suspect to court.

“The statement coming from the governor or anyone that we are covering up or shielding the suspect is unfounded and untrue.”

He admitted that two people died in the accident, but noted that the law should be followed rather than the jungle justice.