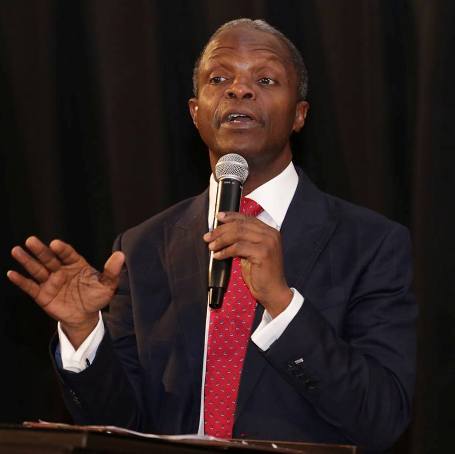 Vice President Yemi Osinbajo has said that the Federal Government was working to break the monopoly of electricity Distribution Companies (DISCOS) following their inefficiency in the collection of tariffs.

Osinbanjo, who said this while inaugurating the Electricity Metres Making Company in Onna, Akwa Ibom State, also said that the Federal Government has put machinery in place to ensure that electricity consumers get effective service delivery at affordable rate.

The Vice President, who also inaugurated a syringe manufacturing company also located in Onna Local Government Area and the renovated General Hospital in Etinan to mark the 30th anniversary celebration of the creation of Akwa Ibom State said: “We have identified that the Discos are unable to collect effectively their tariff from the consumers because they are unable to afford the cost of metering. In the first place, we are going to have independent metering and agent. It is now opened and anybody can take a batch of consumers on metre. This is an important innovation because it means there in no restriction on those who can actually metre our consumers,” he said.

He described the metering factory as an excellent innovation that would help to address the challenge of power supply in the country.

The Vice President maintained that with the metering factory, access to power would be made easy in the country.

“We are certainly looking for this company opening up this factory in different parts of Nigeria. I think the country is opened up for this kind of enterprise,” he noted.

While inaugurating the syringe manufacturing company, Osinbajo expressed delight with the state government’s efforts, saying it has keyed into the policy of the Federal Government to ensure that the country produces what its needs.

“Let me say how excited I am to commission this project. Just as the Governor has said, this is a landmark project for the nation not only for Akwa Ibom State because it is strictly important to what we have been talking about for the past two years about producing what we need,” he said.

He commended the people of the state for providing peaceful environment for investors to come and invest in the state.

Speaking earlier, Governor Udom Emmanuel said the state government was looking for an opportunity to provide each household in the state with power supply.

The Governor said with the metering company, consumers would key into having power in their homes, stressing that he would continue to partner with the private sector to bring in tangible development into the state.

On the syringe factory, the Governor said that with the consumption of more than 600 billion syringes in the country yearly, the establishment of the company would reduce the importation of the product into the country.

“We noted that today Nigeria with over 170 million people consume an average of 600 billion syringes in a year and 100 per cent of that imported into the county. So, we made a bold step that syringe importation into the country would be stopped,” he said.   He explained that the syringe company is 100 per cent private investment, saying that with the factory much should be expected in foreign exchange.