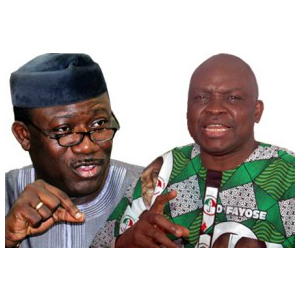 The Judicial Commission of Inquiry set up by Ekiti State Government to look into the financial transactions of the state under the administration of Kayode Fayemi has said that the former governor must account for the whereabouts of ₦2.75 billion allocated from the ₦25 billion bond obtained by the government for the execution of contract for the construction of Ultra-Modern market in Ado Ekiti, which was never executed.

The commission of inquiry also said that the contractor in respect of the furnishing of the government house built by the Fayemi administration should be made to refund ₦324.8 million, noting that the contract should not have been more than ₦280 million.

The panel said it found out that KITWOOD Nigeria Limited to which the furnishing contract of over ₦600 million was awarded had no traceable address and that “the address on the Letter of Award is a virgin land at opposite the new Central Bank along new Iyin Road, Ado Ekiti.

These and several other revelations were made known today, when the commission of inquiry submitted its report to the State Governor, Ayodele Fayose. The panel was headed by a retired judge, Silas Oyewole.

On the purchase of vehicles, the panel said “claim by Coscharis Motors that it supplied 235 and/or 250 vehicles was fraudulent and fraught with so many contradictions.

“That Coscharis Motors supplied some vehicles outside Ekiti State especially, at Ibadan Liaison office when Ekiti State Government does not have a Liaison office in Ibadan. In respect of this, seven vehicles were supplied outside the State and signed for by unknown persons.

On the controversial ₦852.9 million State Universal Education Board (SUBEB) fund, the commission said it was clear that the government of Mr. Fayemi hoodwinked the federal government into paying its own matching grant by obtaining ₦852, 936,783.12 loan from Access Bank on November 25, 2013 without perfecting documentation in respect of the loan, thereby flouting the provisions of Section 11(2) of the UBEC Act, 2004.

While receiving the report, Governor Fayose said asking people to account for their stewardship should not be termed witch hunting, as leaders must be accountable and that Ekiti people have the inalienable right to know how their commonwealth was being used.

“I appreciate the panel members for a thorough job done. The time and energy they put into the job. The panel waited for the outcome of the court case instituted by former Governor Kayode Fayemi before it concluded its job because we are ardent believers in the rule of law and if the court had ruled that we should stop, we would have stopped.

“There is no witch hunting in a situation whereby people are asked to account for their stewardship. Am glad that the federal government is also pursuing the policy of accountability and we are following suit here too,” he said.

Earlier, Mr. Oyewole said though the panel was given three months to do its work when inaugurated in May this year, it had to bid its time to see the end of the litigation by Fayemi.

The counsel to the probe commission, Sunday Bamise, told the panel today, that all the witnesses called by the panel appeared; except Mr. Fayemi, who is the current Minister for Steel and Minerals Resources Development; his commissioner for finance while he was governor, Dapo Kolawole; and CASA Consult Limited.

Mr. Bamise said having heard from the witnesses that appeared before the panel, he urged the commission to close the public hearing so as to take a step in writing and submitting its report to the state governor, Ayodele Fayose, who set up the commission.

It should be recalled that last week Thursday, a High Court in Ado Ekiti affirmed the legality of the judicial commission of inquiry, saying the Ekiti State Governor, Ayodele Fayose had powers to run affairs of his state and that he had exclusive rights to set up commission of inquiry without the prompting of the House of Assembly and that he properly so acted.

Justice Lekan Ogunmoye, who delivered the judgment in the suit filed by Mr. Fayemi against the commission of inquiry, said Mr. Fayose acted pursuant to Section 2 (1) of the Commission Inquiry Law Cap C10 Laws of Ekiti State. He dismissed all other reliefs seeking to set aside and perpetually restrain the Commission.

Mr. Fayemi was yet to react to the final report of the panel as at the time of this report. But he refused to appear before the panel saying he could not get fair hearing and the panel was illegally constituted.