More from Ekiti Comments Off on Ekiti: The governor presents ₦98.6bn budget 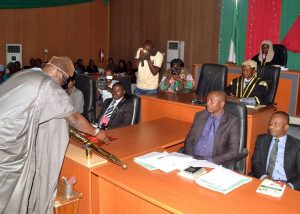 Governor Ayodele Fayose has presented a budget of ₦98.6 billion for approval to the State House of Assembly for the year 2018, saying he is accomplished by what his administration has achieved in the last three years in the face of serious economic and political challenges.

The governor, who presented the budget on the floor of the Assembly, on Tuesday, also presented his deputy, Prof. Kolapo Olusola, to the lawmakers as his preferred candidate for next year’s governorship election, and expressed optimism that Olusola would be the person to present the 2019 Budget to the legislators.

In a statement by the governor’s Chief Press Secretary, Mr. Idowu Adelusi, in Ado-Ekiti, the 2018 Budget is about six percent higher than the 2017 Budget of ₦93.09 billion and is christened ‘Budget of Accomplishment’.

The budget has ₦66.4 billion going to Recurrent Expenditure, while Capital Expenditure is expected to gulp the sum of ₦32.1 billion.

The objectives of the 2018 Budget include the completion of critical ongoing capital projects, to improve internally generated revenue, improve education, health services, sustenance of good governance among others.

Reviewing the three previous budgets he presented in 2015, 2016 and 2017, Fayose noted that they performed at 66, 75 and 66 percent, a higher level than those of the Federal Government.

Giving his words to the people of the state on the focal points of the budget, the governor gave the completion dates of major ongoing capital projects.

“By the grace of God, the High Court Complex will be completed and inaugurated by the end of March 2018, the New Governor’s Office by April 2018, the flyover by May 2018 and the new Ojaba Market by the first week of July, 2018. This is my last budget presentation as the governor of the state. We will complete all ongoing projects.

” We are also realistic about our expectation as far as revenue generation is concerned and we have not set ourselves on a needless high horse. As for the issue of outstanding workers’ salaries, we still rank among the best in the region and the nation. I am positive that we won’t leave office debtors of salaries.

“Apart from presenting the budget, I also crave the indulgence of the honourable members to present my deputy, who I strongly believe will be the person to present the 2019 Budget to the Assembly, Prof Kolapo Olusola. We have to allow for continuity for the good works to continue and for our state to move forward,” he stated.

In his welcome speech, the Speaker, Rt Hon. Kola Oluwawole, said because the lawmakers were part of the drafting of the document, it would not take much time to pass it into law.

He commended the governor for structuring the budget within expected revenue profile.

“The legislature as arm of government will not shy away from performing its duties. Governor Ayodele Fayose’s open door policy, prudent management of resources and accessibility are worth commending. People have found accommodation and succour under him.

“Dwindling oil revenue is a a lesson for us not to put all our eggs in one basket. The immediate past administration compounded our economic situation by unbridled borrowing and engagement in frivolous projects and we are paying for it now, as a large chunk of our monthly allocation is deducted to service debts,” he added.