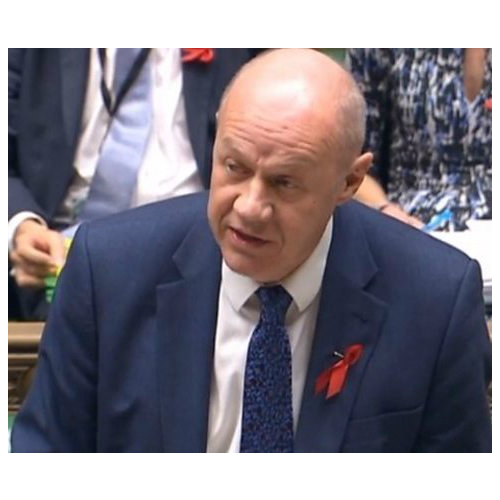 A former Scotland Yard detective has told BBC News he was “shocked” by the amount of pornography viewed on a computer seized from the Commons office of senior Tory MP Damian Green.

Neil Lewis examined the device during a 2008 inquiry into government leaks and has not spoken publicly before.

He said “thousands” of thumbnail images of legal pornography were on it.

Mr Green, Theresa May’s deputy, has said he never watched or downloaded pornography on the computer.

But Mr Lewis said a check of the computer’s internet history over a three-month period showed pornography had been viewed “extensively”.

On some days, websites containing pornography were being searched for and opened for several hours.

Mr Lewis, who retired from the Metropolitan Police in 2014, said although “you can’t put fingers on a keyboard”, a number of factors meant that he was sure it was Mr Green, the MP for Ashford, Kent, who was accessing the pornographic material.

His analysis of the way the computer had been used left the former detective constable in “no doubt whatsoever” that it was Mr Green, who was then an opposition immigration spokesman but is now the first secretary of state.

“The computer was in Mr Green’s office, on his desk, logged in, his account, his name,” said Mr Lewis, who at the time was working as a computer forensics examiner for SO15, the counter-terrorism command.

“In between browsing pornography, he was sending emails from his account, his personal account, reading documents… it was ridiculous to suggest anybody else could have done it.”

Similar material had also been accessed on Mr Green’s laptop, he claimed. 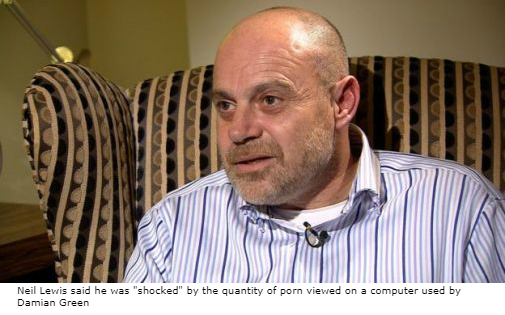 A Cabinet Office inquiry, set up last month to investigate allegations that the 61-year-old had made inappropriate advances to a political activist, Kate Maltby, is also examining the pornography claims.

The inquiry is believed to centre on the ministerial code, which sets out the standards of conduct expected of government ministers.

The code says they are expected to demonstrate “the highest standards of propriety” and contains reference to the Nolan Principles that holders of public office should be “truthful”.

A spokesperson for Mr Green said: “It would be inappropriate for Mr Green to comment on these allegations while the Cabinet Office investigation is ongoing, however, from the outset he has been very clear that he never watched or downloaded pornography on the computers seized from his office.

“He maintains his innocence of these charges and awaits the outcome of the investigation.” 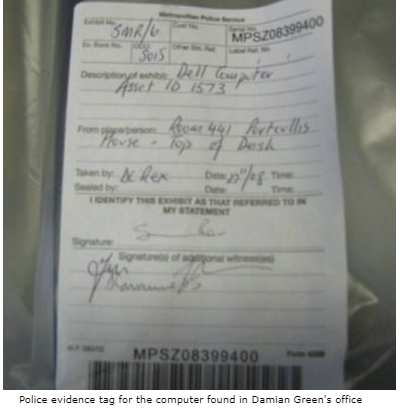 Despite being told about Mr Lewis’s role examining Mr Green’s computers, the Cabinet Office inquiry has not contacted him to give evidence.

The Cabinet Office declined to give an explanation for that, but it’s thought its inquiry may have approached the Metropolitan Police directly for details about the computers.

The force has said it is not prepared to discuss the matter.

During his time on SO15, Mr Lewis worked on some of Britain’s most high-profile terrorism inquiries, including the 21/7 attack on London’s transport network in 2005 – when he took a lead role examining digital devices.

He also worked on Operation Miser, an investigation into Home Office leaks that began in October 2008 and resulted in Mr Green’s Commons office being searched by police.

Mr Lewis’s job on the investigation was to search for material relating to documents that had been disclosed without authorisation from the Home Office, on computers used by Mr Green.

In accordance with standard police practice, Mr Lewis carried out the examination on digital copies he had made of the computers’ hard drives.

When he ran a “gallery view” of images viewed on the desktop computer in Mr Green’s Portcullis House office he noticed “a lot of pornography thumbnails which indicated web browsing”, that he later confirmed by an examination of the computer’s internet history.

The pornography was not “extreme”, as some reports have suggested, and did not contain images of children or abuse, said Mr Lewis, who previously served in the Met’s obscene publications unit and carried out investigations into paedophiles.

The matter was not referred to the Crown Prosecution Service for a charging decision.

The former detective, who spent 25 years with the Met, said after the leaks inquiry ended he was ordered by the force to delete the data on the computer copies he had made.

“Morally and ethically I didn’t think that was a correct way to continue,” he said.

The officer erased the data, as instructed, but kept the copies knowing experts could retrieve the information if they had to. However, he now believes the items may have been destroyed. 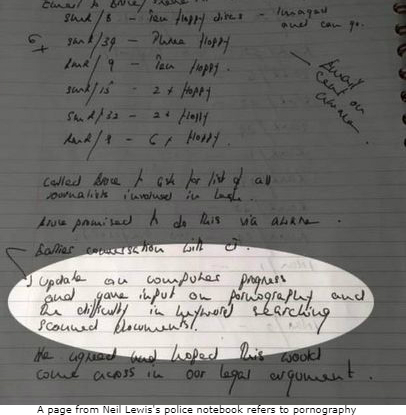 When he left the force after being diagnosed with multiple sclerosis, Mr Lewis said the only police notebook he took with him was the one he had used during Operation Miser.

The notebook, seen by the BBC, contains a reference to pornography.

“This one case, Operation Miser, I have never been comfortable with,” he said, claiming the Parliamentary authorities should have been informed about the “extensive” time Mr Green allegedly spent looking at pornographic material.

“If a police officer does that, or anyone else, you’d be dismissed, you’d be thrown out.”

The MPs’ code of conduct states members should always behave with “probity and integrity, including in their use of public resources”.

The pornography allegations were first alluded to by Bob Quick, a former Metropolitan Police Assistant Commissioner, in written evidence to a Parliamentary committee in 2009.

He said the discovery of “private material” on Mr Green’s office computer had “complicated” the inquiry into Home Office leaks.

In 2011, Mr Quick expanded on the matter in a draft statement for the Leveson Inquiry into press ethics, but it was removed from the final version, only to resurface last month in a Sunday Times article.

Mr Green responded to Mr Quick’s assertions by accusing him of spreading “disreputable political smears”, an attack that so infuriated Mr Lewis that he approached the former counter-terrorism chief to offer his support. He even thought about contacting the cabinet minister directly.

“His outright denial of that was quite amazing, followed by his criticism of Bob Quick,” said Mr Lewis.

“I think he [Mr Green] should have resigned a long time ago.”

Sir Paul Stephenson, Met Commissioner during the leaks investigation, told the BBC he had been briefed about the pornography in 2008 but considered it to be a “side issue”.

The Office of the Parliamentary Commissioner for Standards has said it has no record of a referral being made.