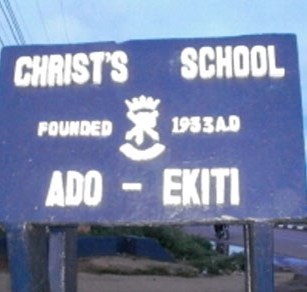 The corporate annual scholarship award sponsored by the publisher of the newspaper, James Bamisaye was given to the best English Students in JSS 2 to SS3.

The event was part of the programme marking the 5th annual scholarship award powered by the 1988-1993 Alumni set of the school.

Bamisaye, also an alumnus of the school also donated dictionaries and N10,000 each to the recipients

Speaking at the event, a former Principal of Christ’s School, Ado-Ekiti, Chief Olusola Bayode urged academics in the country to make good works and positive instruction their watchword while relating with their students in and outside the classrooms.

The Alumni set also resolved to take up the financing of the education of one of the indigent awardees, Okenla Samuel till the end his secondary education.

Chief Bayode said: “It is good to be together again. They have come to identify with us as their former teachers who were relevant to their lives.

“ To the teachers, their former students will always remember their good works and how they had impacted their lives positively. The old days have been reversed today; they are the ones doing the talking while we look on. Being good has a constant value”.

While noting that most Alumni sets which passed through him have contributed their quotas in no small measure to the development of their alma mater, Chief Bayode charged the present students of the school to emulate the gesture of the Alumni.

Earlier in his remarks, the Chairman of the Lagos Chapter of the Alumni Set, Mr. Kunle Olabintan, said they used the occasion of this year’s edition of the award to appreciate the good seeds that Chief Bayode and other notable teachers present sowed in their lives some thirty years ago.

Olabintan who noted that the impacts of the scholarship on the awardees over the years have been tremendous over the years said the Alumni will always seek to improve on it every year.

He added that the fatherly advice of Chief Bayode has helped the group in the areas such as the inauguration of National Working Committee, establishment central interactive forum for members, increment in the number of the awardees and the amount being awarded annually, donation of a complete set of sporting gear ( jerseys and soccer boots) to the school football team and continued donation of relevant textbooks to the school library among others.

Urging the awardees to make the most of the opportunity, he promised that the Alumni will not rest on its oars in supporting the school and the students.

He commended the National Executive Committee of the school Alumni Association led by Dr. Uduimo Itsueli for the great works being done to move the association and the school forward.

Mrs Okenla Folasade who spoke on behalf of the parents of the awardees thanked members of the Alumni sets for the gesture, saying God will continue to elevate them.