Politics Comments Off on 2019: I don’t want to replace Osinbajo as VP –Jagaban 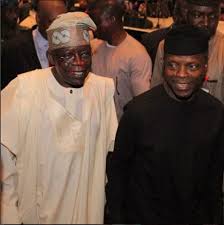 Reacting to a  report that president Buhari may pick him as running mate in the 2019 presidential election, if he contests, Tinubu said just as he supported Osinbajo to be Buhari’s running mate in 2015, he still stands for that as the duo have been doing a good job in running the country.

In a statement by his Media Office, yesterday, Tinubu noted that he and the people of the South West “have absolute confidence and are exceedingly proud of the excellent job Prof Osinbajo is doing as vice president of Nigeria.”

Insinuating that he has no interest in being vice president, Tinubu said: “Contrary to the impression the story seeks to create, Asiwaju’s politics is not that of unbridled personal ambition for selfish interest. When at some point in the build up to the 2015 election, president Buhari offered him the vice presidential ticket, Tinubu gratefully and publicly thanked the president. When it turned out that such an offer would not be in the interest of the party and would play into the hands of enemies of change, Asiwaju unreservedly and passionately threw his support behind Osinbajo, as the best man for the job. His opinion has not changed. Indeed, his confidence and belief in Osinbajo has been amply justified by the latter’s sterling performance in office.”

Tinubu restated his statement while endorsing Osinbajo on December 17, 2014: “After all, the political calculations are made and the dust of competition has settled, it must be this nation and its people who stand first and foremost. The question becomes whether we stand strong, able to shape ourselves into our best future or will we stand frail and trembling, burdened by the abject failure to surmount the multiple problems confronting us…For me, political ambition will never triumph over patriotic conviction. This delicate moment affords no space for emotion to intrude to blind us from what is best. The APC is the best and only vehicle to enact the progressive and broad change this nation cries for. I eagerly lend myself to this fine cause without me having to be on the ticket. This is a time for cohesion and an overriding sense of mission. We must defeat the foe before us and resist all temptations intended to entice us to fight among ourselves.’ As it was then, so it remains today.”

Tinubu said there is no way Osinbajo would consider returning to full church work, against contesting with Buhari for a second term  “without as much as discussing such a sensitive issue with his party and with Asiwaju Tinubu,” and added: “In any case, is this story not entirely unwarranted and indefensible as the Buhari/Osinbajo ticket has an electoral mandate of four years out of which it has spent only over two years and a half years?”

He said the insinuation on change of VP in 2019 was  “an attempt to distract the APC-led Federal Government from the yeoman’s job it has been doing in rescuing the country from the deep rooted socio-economic, political, security and moral mess inherited from the PDP’s 16 years misrule of Nigeria, instigate crisis within the party, stoke dangerous embers of religious disaffection within the party and the country generally and stem the remarkable progress being made in the reinvention and revitalisation of Nigeria.”

According to the former governor, he has confidence and faith in both President Buhari and Vice President Osinbajo, “ who have been working hard harmoniously in offering inspirational leadership to Nigeria at a most critical period in her history.” He added: “The hemorrhaging of the national economy, through the wanton and unprecedented corruption that obtained before the advent of the APC-led federal government has been stanched.”

Praising the Buhari government, Tinubu said there is now “greater sanity, accountability and transparency in the management of the country’s finances. The Boko Haram insurgency has been substantially contained. We should not allow ourselves to be derailed from the job we are effectively undertaking in fulfilling our campaign promises anchored on the tripod of containing insecurity, taming the scourge of corruption and resuscitating the economy.”

He vowed not to support any attempt to distract Buhari and Osinbajo and insisted the vice president has done well in office.

“Here is a man of the highest integrity, moral rectitude, amazing humility, high intellect and unimpeachable credibility. Here is a man of fierce loyalty and absolute trustworthiness who will never do anything in word, thought or deed to undermine his boss. His unquestionable dependability and indisputable fidelity to his oath of office was demonstrated beyond question by his honourable conduct during the President’s medical vacation. Asiwaju Tinubu and the people of the South West have absolute confidence and are exceedingly proud of the excellent job Professor Osinbajo is doing as Vice President of Nigeria,” the former Lagos state governor said.

Tinubu also denied the existence of  a rift with Buhari. “We challenge the media to provide any evidence where Tinubu has ever complained of any grouse against Buhari.  As Asiwaju had cause to point out recently, having been elected president, Buhari had to be given the space to run his government.

“There have always been and always will be channels of communication between Tinubu and Buhari as members of the same party. Their interaction must not necessarily always be conducted in the public space.”